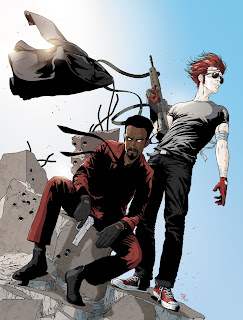 Bad boys, bad boys, whut you gon' do? Whut you gon' do when they come for you? The ever wonderful Jon Davis-Hunt is back (where he belongs!) on the Galaxy's greatest this week with a Sinister Dexter cover that simply oozes cool!

Jon is a truly lovely guy and an amazing talent so I was thrilled last year when I heard he'd landed a high profile gig as artist on Clean Room for a little publisher called Vertigo. However, despite my best efforts at getting my clone-o-tron machine working, this meant that 2000AD was robbed of one of it's most exciting droids, albeit temporarily!

Getting such a high profile droid back required something massive, and it doesn't get much bigger than Sinister Dexter finally whacking that fat shite Holy Moses Tanenbaum! Over to Jon to tell us how he went about it 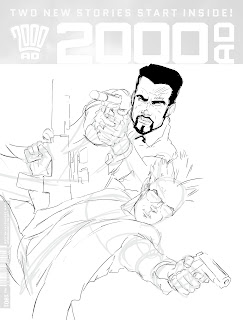 
"This was my first initial sketch, based on the idea of Sin and Dex making a last stand. However, my wife pointed out that just having them blasting away with their guns reminded her of a host of other covers (many which I had already drawn). She suggested ‘Why not try something different – maybe draw them as they would look after a battle had finished’. As always, she was right."
Ha, how pathetic! Jon is so under the thumb! You wouldn't catch m... Oh, hi dear. Nothing! Nothing! Just doing some work. A cup tea? And a sandwich? Of course, right away. Excuse me a minute folks...

Second Sketch – Bruised but not beaten... 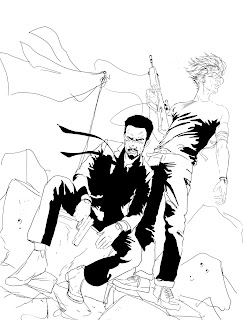 ﻿Finny and Ramone exposed in this weeks' episode of Dodgy Builders...


"I ran with that idea and almost instantly came up with this layout. I wanted to convey a real ‘80’s action hero’ pose. Low angle, Sin and Dex looking cool – almost like they had been in a battle, and more adversaries were possibly on their way, but they were completely undeterred."

"It was at this point that I started to tweak their clothing (particularly Finn’s). Sin and Dex have such a strong, iconic look, and their clothes are so important. I kept Dex in a neat, tailored suit, then loosed his tie and roughed it a bit, to give him that slightly night-after-Vegas, almost Rat-Pack look. With Finnegan, I made his clothing more casual and then picked out the red from Dex’s suit on his gloves (which I changed to leather) and added baseball boots. I also gave him a more James Dean haircut and chrome aviators. I was just thinking ‘make em look as cool as possible’."

"I do all my sketching now straight into Photoshop (although I will still do very small, quick thumbnails, normally in biro on a piece of A4 or A3 paper). When I rough ion Photoshop, I uses a large brush and keep my sketching quick. I’ll then drop the opacity of that layer down and sketch again over the top. I’ll keep doing this several times (sometimes discarding layers) until I get the proportions and composition correct." 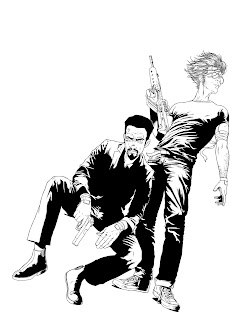 "My next step is to start inking over my worked up sketch. I ink completely digitally, using a simple set of Photoshop brushes. I vary brush size, to get a nice gradient and granularity to my line work. I like to vary images now with some heavy blacks (for clothing) but keep faces and hands almost always shadow free. I also like to add more detail to hair and then any clothing or prop features (e.g. clothing seams, gun clips etc)." 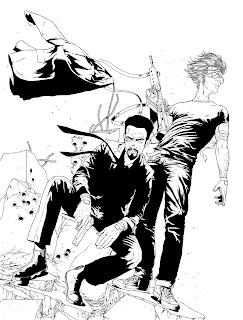 ﻿Cool as der cucumber - oops, wring strip...
"I knew in my head what I’d like the background to be, but hadn’t bothered to rough it in (lazy!). Once the figures were drawn, I simply roughed it out very quickly, reduced the opacity of that layer (in Photoshop) and inked it in." 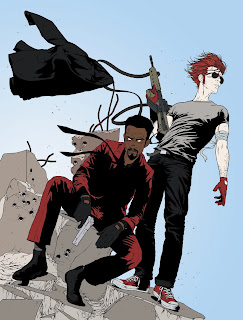 "I flat in Photoshop. Here I knew that the Red was going to be important, so I added that first, then went in and coloured the remainder of the figures, keeping the palette quiet subdued." 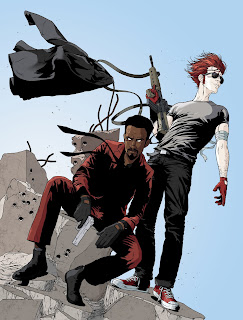 
"I then added some highlights and shadows. My lighting for this uses a fair amount of artistic license."

﻿"Next!"
"And finally, I added all the finishing touches. BOOM!"

And here's how the prog looks in your local Thrill Merchant, coooool!!! 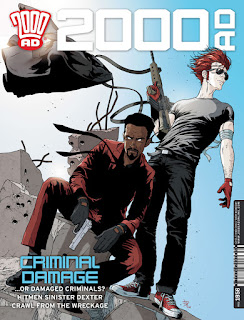 Thanks soooooooooo much to Jon for sending the images! Be sure to check his website out at http://www.jondavis-hunt.com/﻿
﻿
Posted by Pete Wells at 15:27