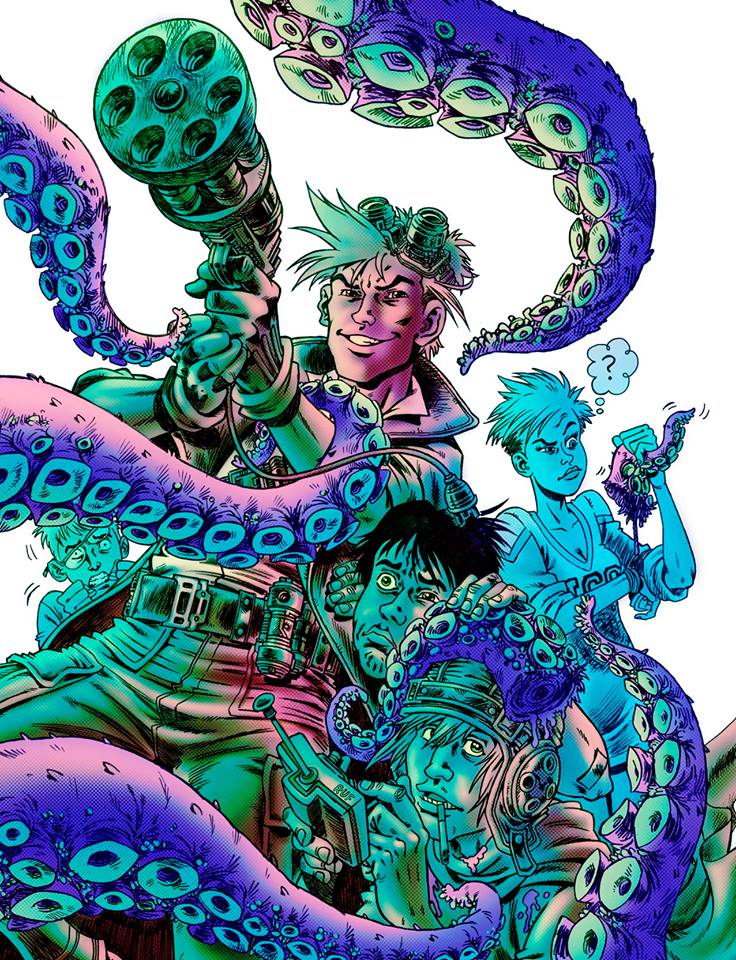 Yes!!! I'm delighted to welcome Amazing Artdroid and Mega 2000AD fan, Mr Rufus Dayglo back to the blog! I adore this talented artist's work, one of those special artists that can capture the very essence of classic droids' artwork - all the attitude of McMahon, the humour of Hewlett, a touch of Ewins but draw in a voice all of his own!

For Prog 1918, he provided the cover for the return of the Survival Geeks. This humorous series featuring loveable geeks and more SF references than you can shake a lightsabre at made its debut as one of Tharg's 3rillers. The strip was very popular, meaning it has been given it the full series treatment so we can see more madcap adventures of top nerd Simon, genius inventor Clive, stoner Rufus and poor Sam, he girl trapped in the time travelling house with these losers.

Rufus was delighted to illustrate a cover for his mate Neil Goodge, who provides stunning visual for the story. He said "Tharg commissioned me to do this cover for Neil and Gordon's new series. I was sent a couple of reference pages as a guide... so I thought I'd try a spaghetti western approach, with the hero as gunslinger... with comedic scared boys, and disdainful girl unimpressed by the Cthulu horror." The 'hero' of this piece is the sickening Evan; a square-jawed, handsome and capable wish mash of action hero tropes with the emotional intelligence of a brick.

"I pretty much sketched up the first competition that came to my mind, and coloured it roughly for Tharg's approval..." " 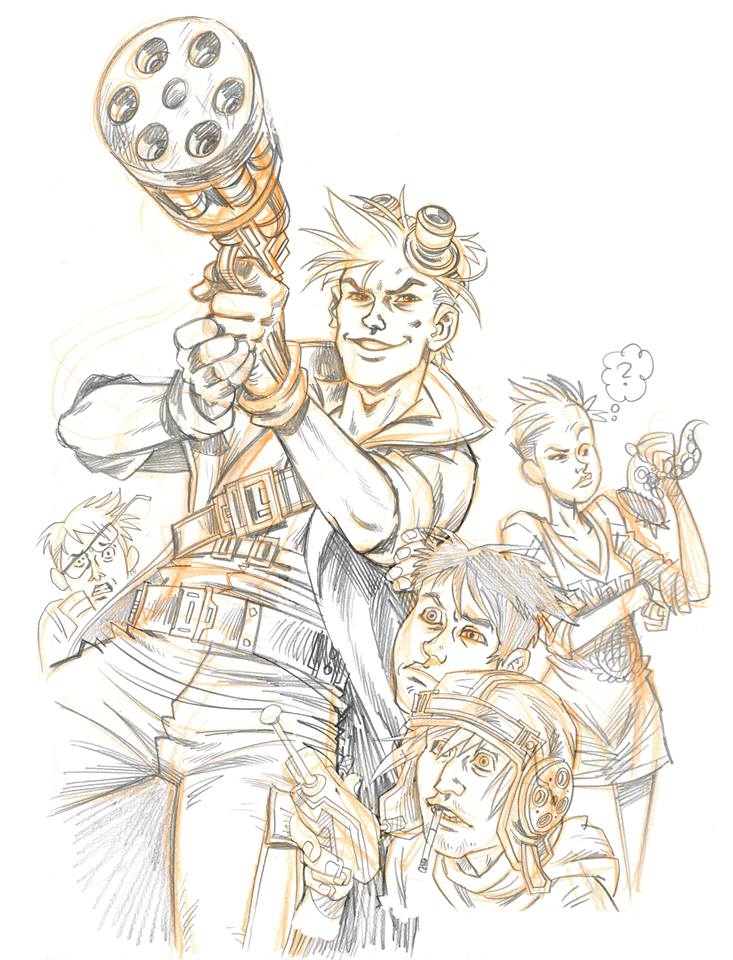 "This is my Boomstick!"


"I added a title to see how it'd look and Tharg was happy with it. He even sent me some fresh styrofoam cups to nibble..." 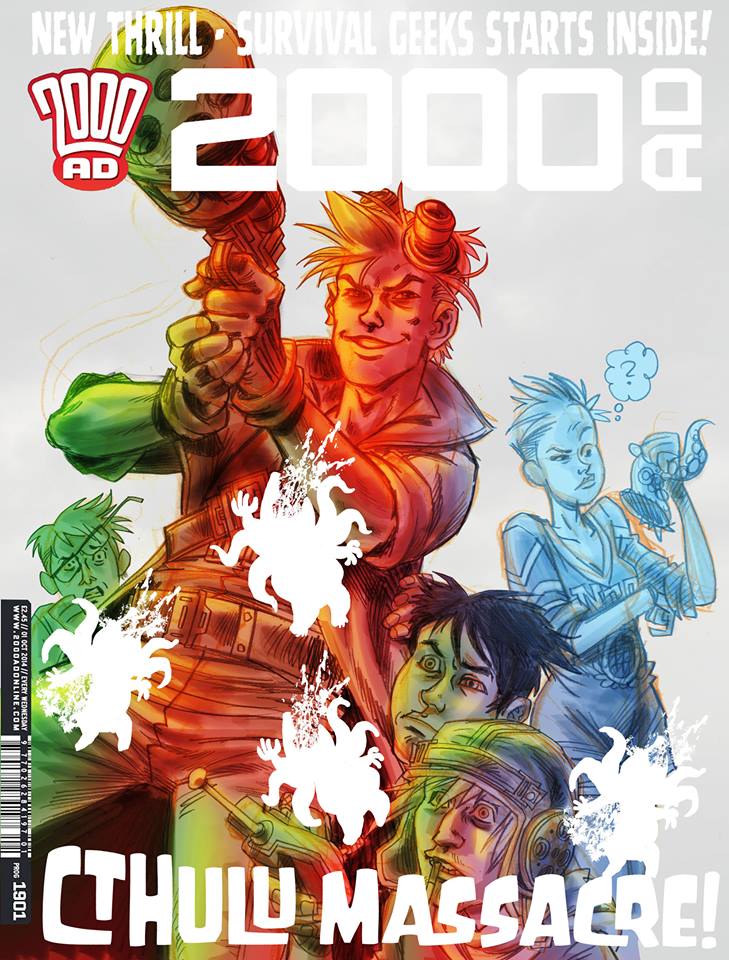 ﻿Hmmm, not sure Evan read the instructions properly on his bottle of fake tan...

"BUT at the last moment I realised it need some focal point...and added the tentacles..." As everyone knows, everything is better with tentacles. 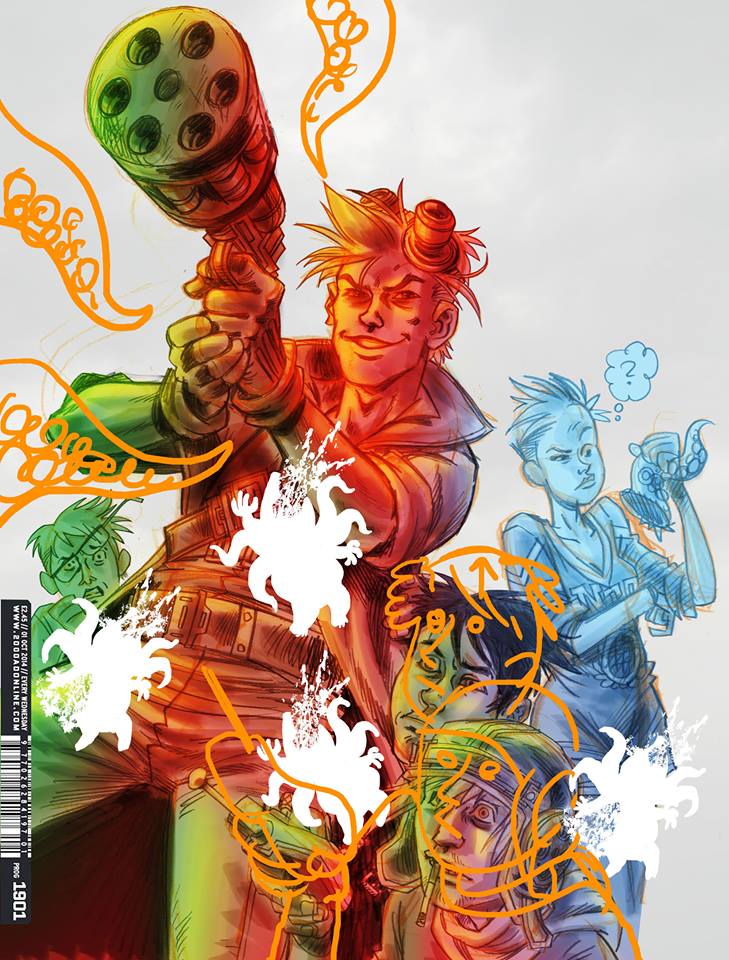 ﻿
Simon and Rufus have had their Ready Brek this morning.

"When I'd finished chewing my way through them, I redrew and tightened up the composition, and coloured it. Originally I was going to colour it 'correctly', but started inverting the colours and err... there you have it."

Yikes! It's suddenly gone cold. I think my blog is haunted!

"I also toyed with having a calamari nightmare Background.... but it was overwhelming....although I kinda like it. Although it does look like someone being sick on the back seat of the bus...." 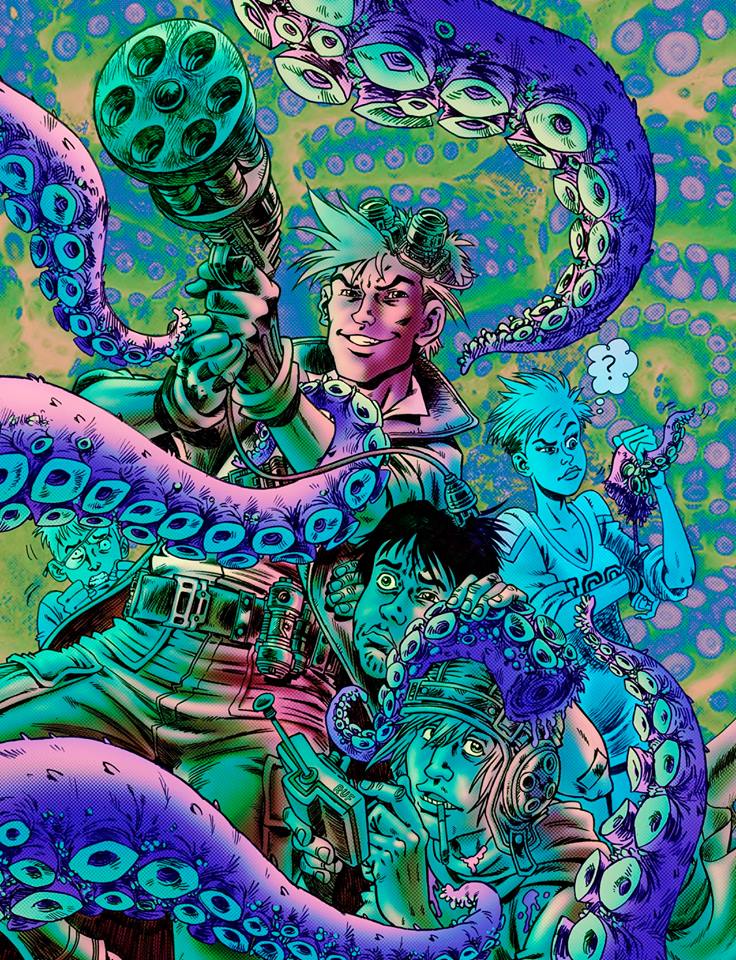 Again, Ruf had a go of knocking up a logo on the image... 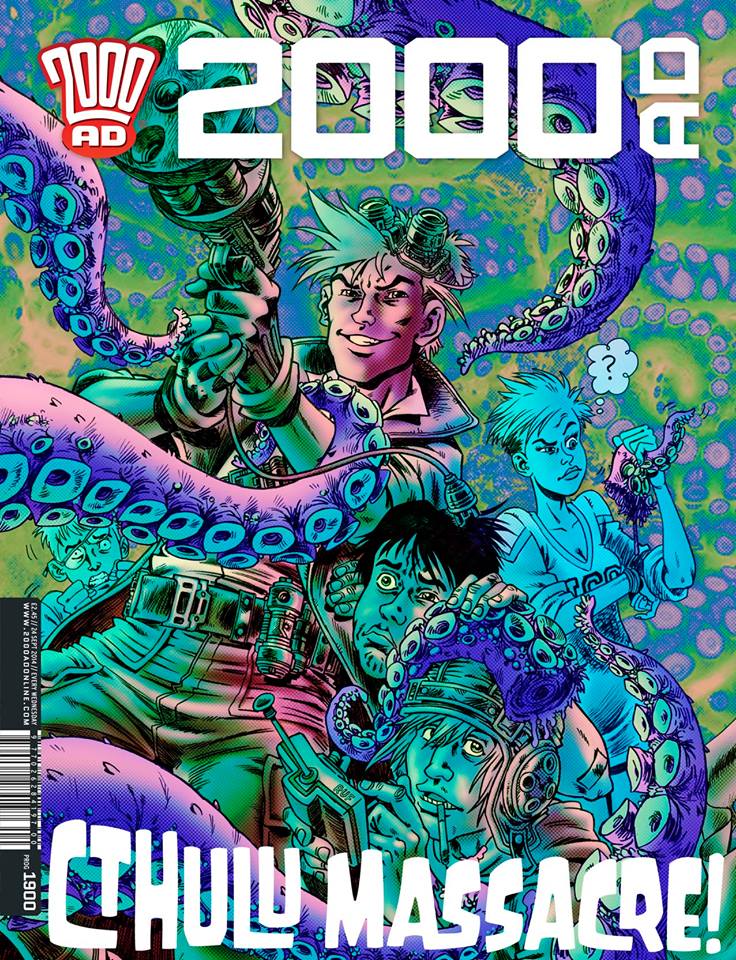 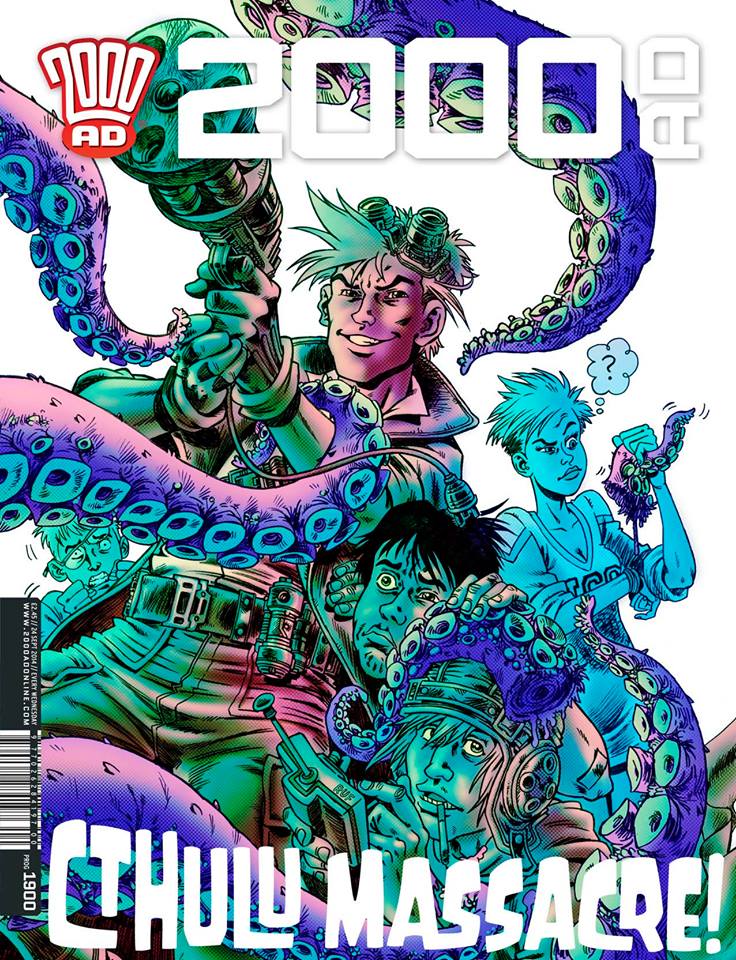 "Don't you chuck, those bloody tentacles, at me!"

And here's how the Prog looks on your shelf! 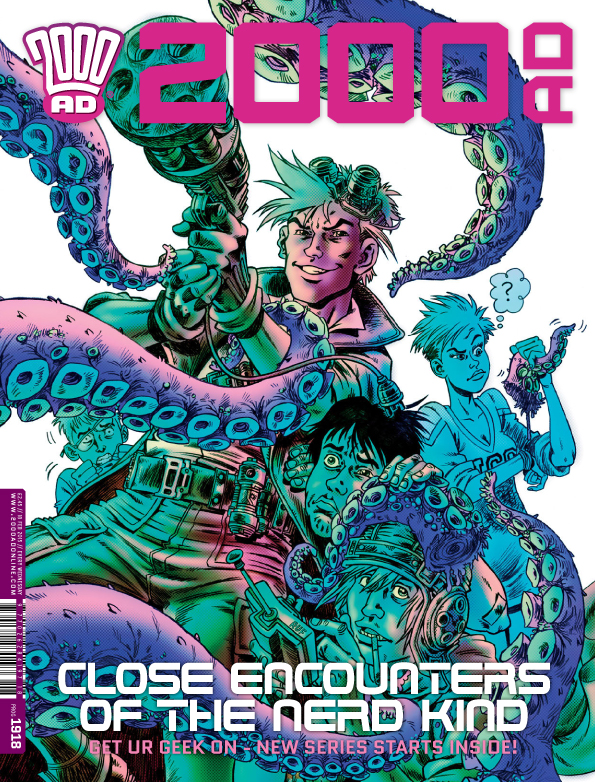 ﻿
How many tickles does it take to make a cthulhu laugh? Ten tickles!

So lets have a wander down memory bank to see more unmistakeable Dayglo goodness. Firstly, the inks and painted version of a very Ezquerra-esque Meg 246 as Dredd cleans up Ciudad Barranquilla! 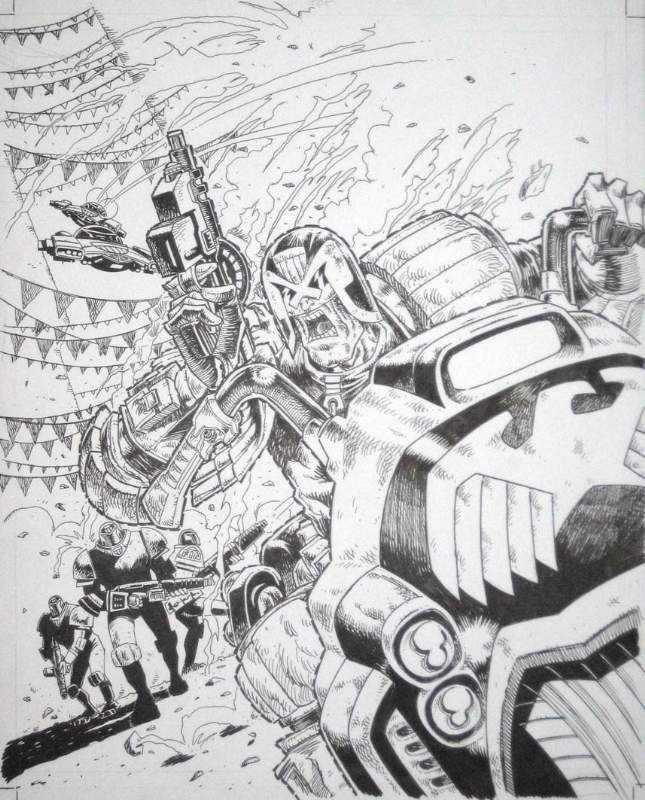 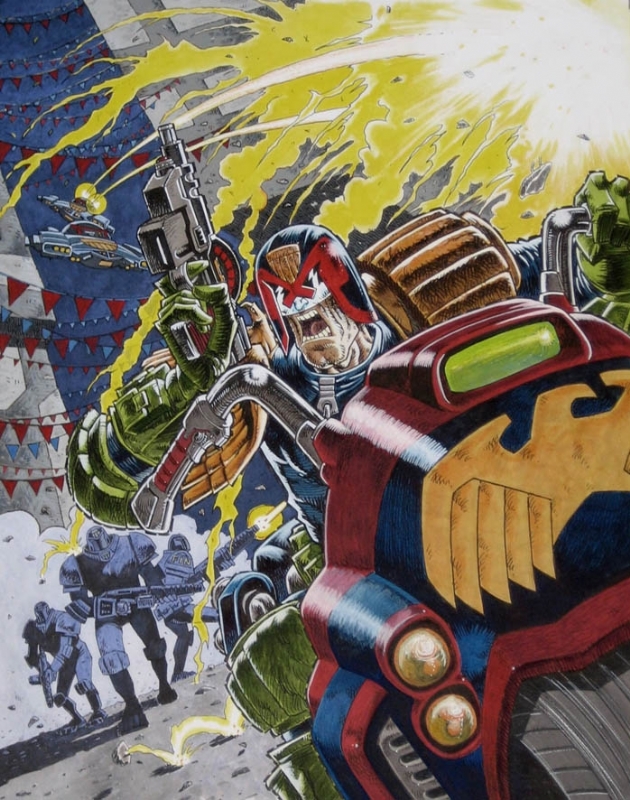 "Last one to the parks a tit!"

Next up, inks and paints for the Origins cover of 1512, fab! 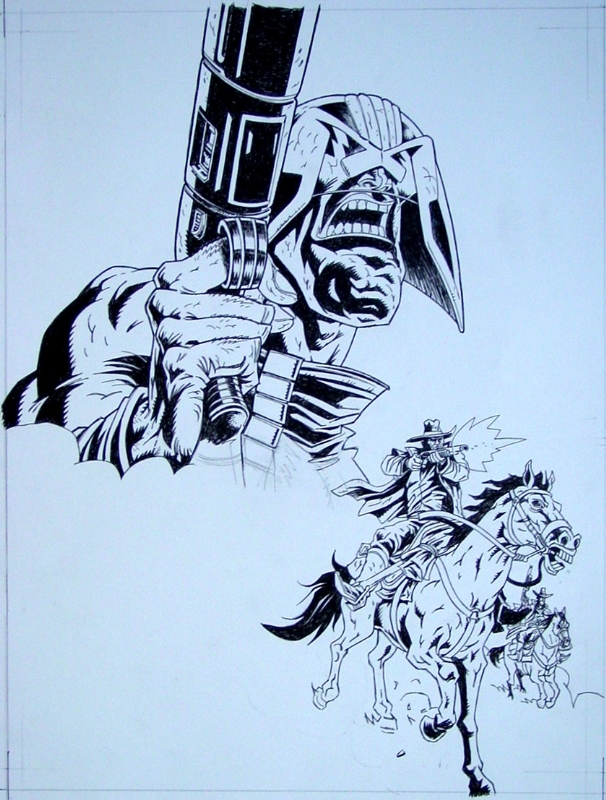 Dredd's chestburster in the forthcoming "Dredd vs Aliens vs Cowboys..." 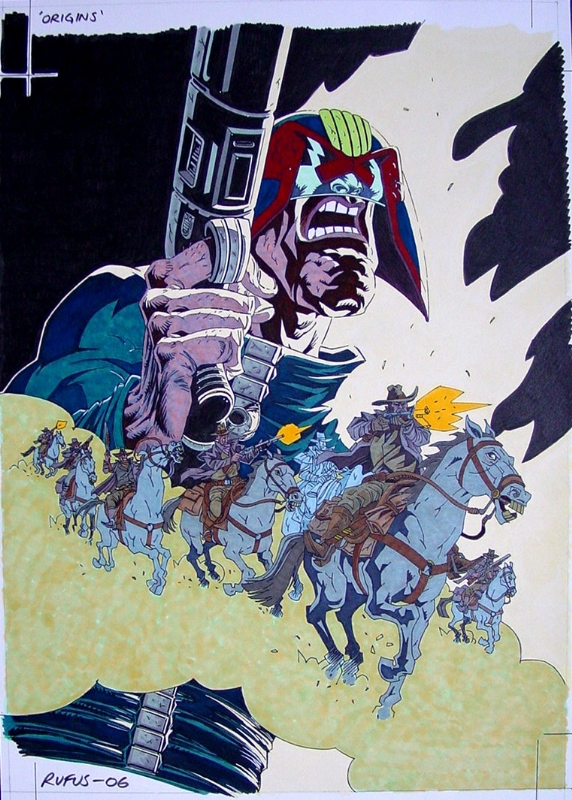 Here's a cracking screen print that Rufus did for Comicdom Con in Greece in 2013, brill! 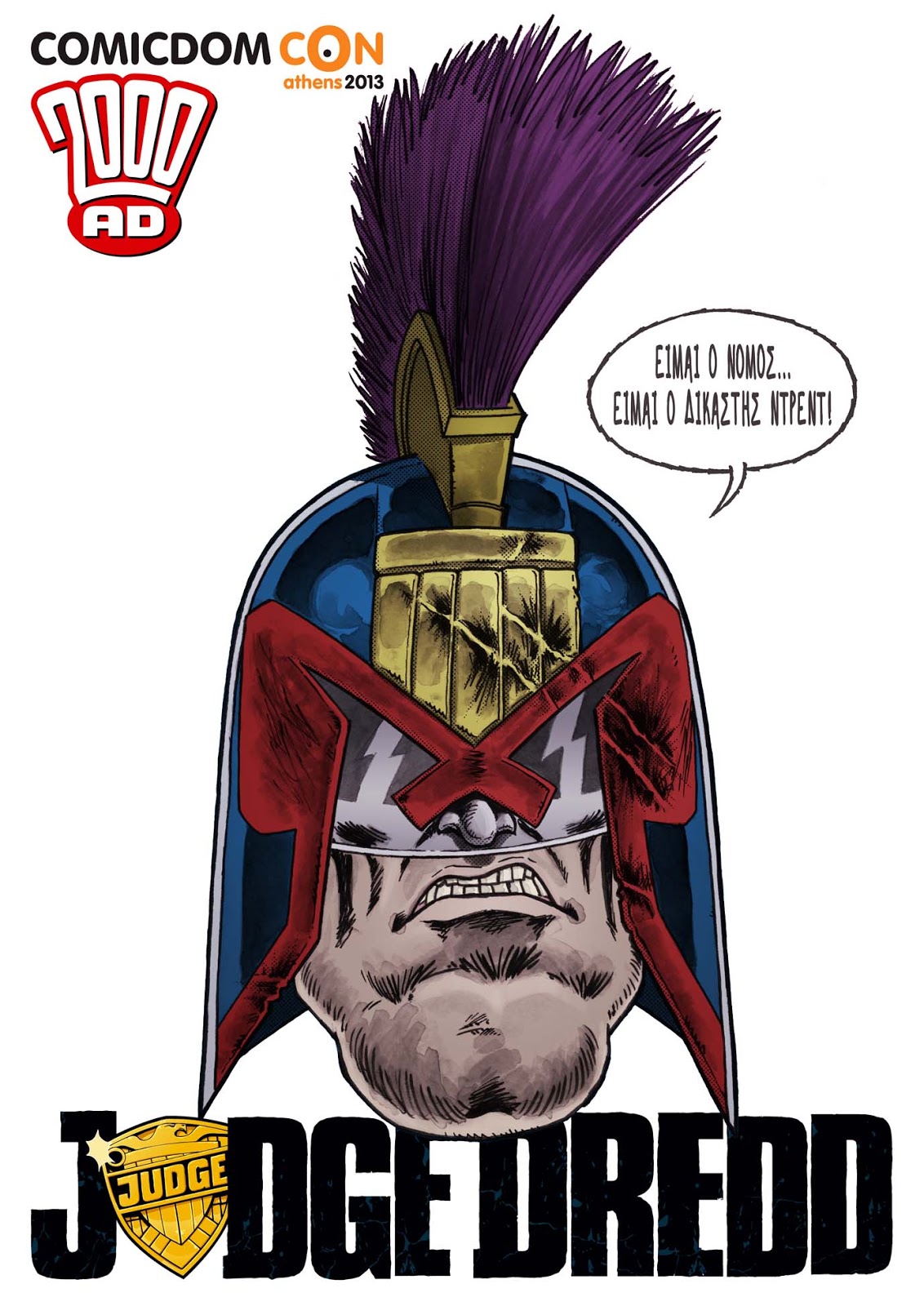 I've always loved this unpublished Cover for Dredd fanzine 'The Class of '79'... 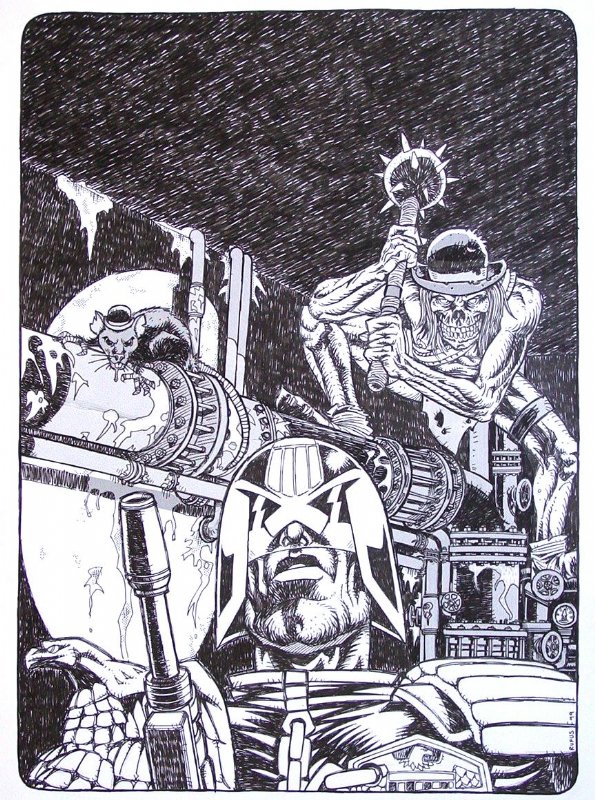 Some Fink wicked this way comes...


And this great present for my mate Mark Willis... 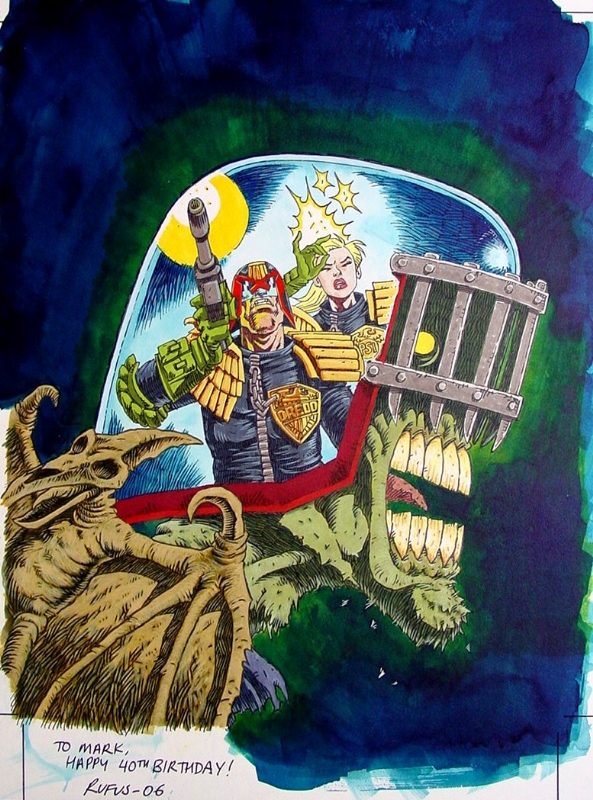 Someone got me in a Secret Santa and got in touch with Rufus who was kind enough to do this brilliant, brilliant picture - I love it! 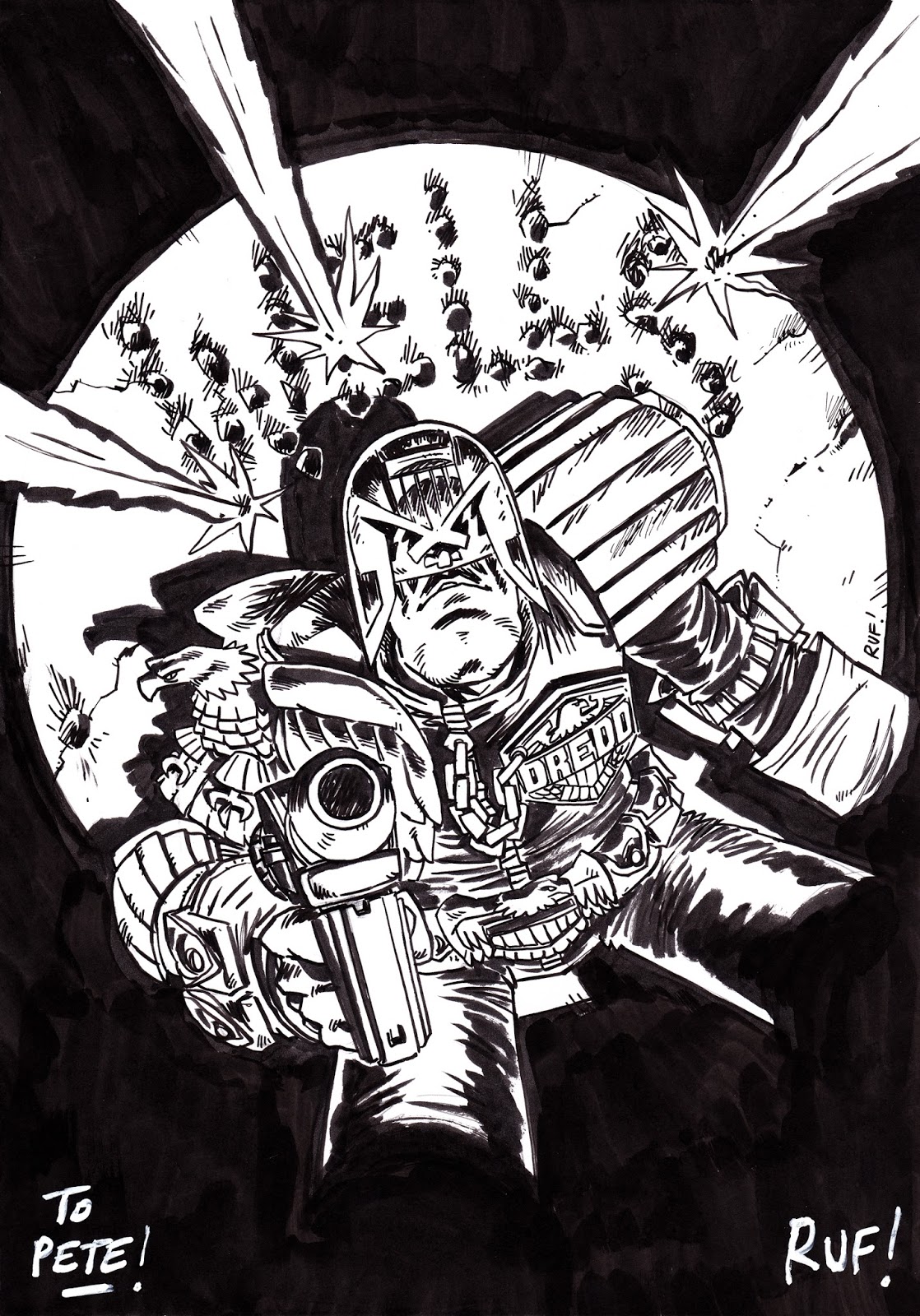 Who IS that mystery sniper?

Back in 2005, Rufus organised the Zarjaz exhibition in London where a plethora of artists exhibited 2000AD-based artwork. Rufus came up with this amazing Kano, I bet Brett Ewins was thrilled! 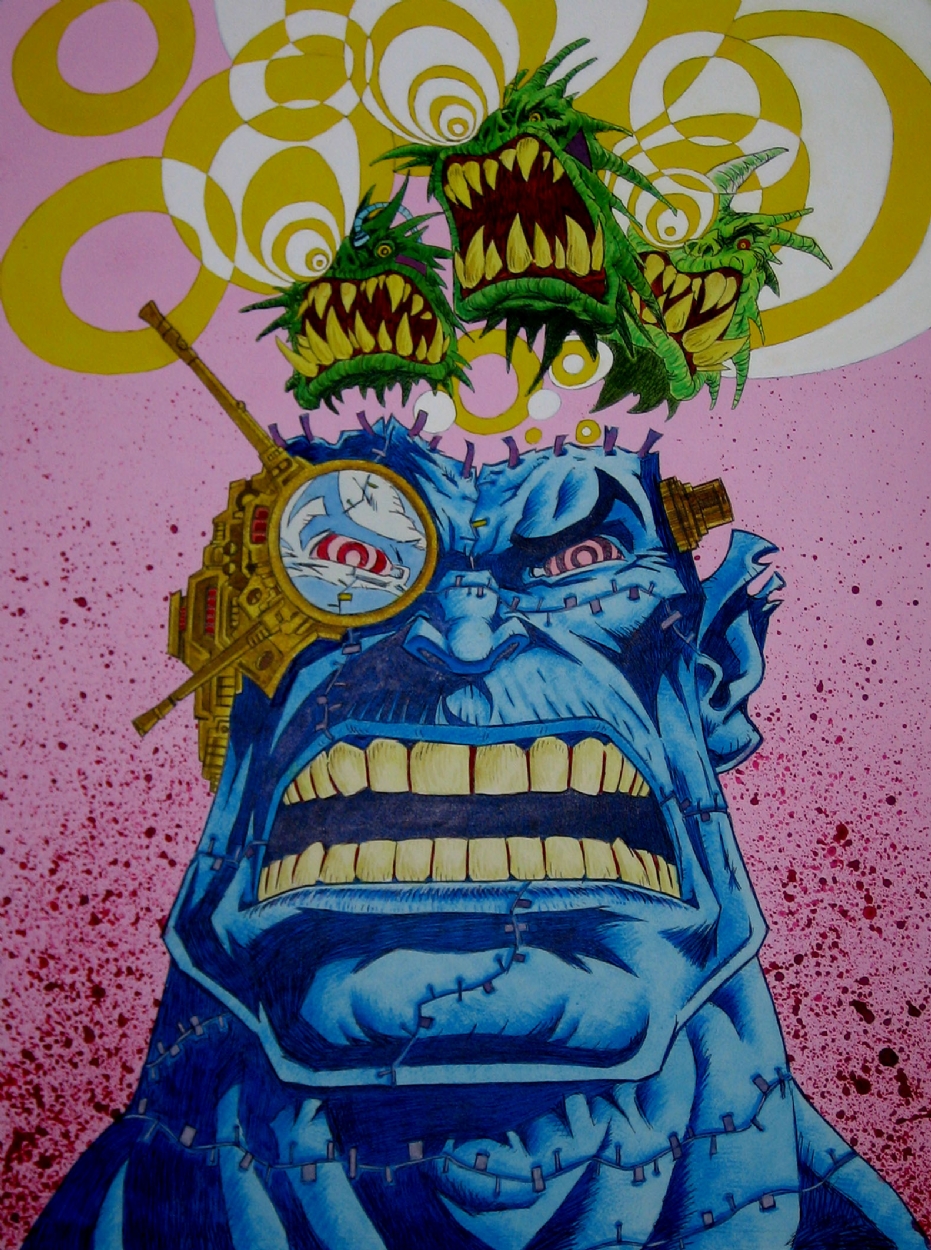 
Rufus is synonimous with Tank Girl and has produced some amazing comics featuring our favourite rebel. This Magazine cover for Skidmarks is just gorgeous... 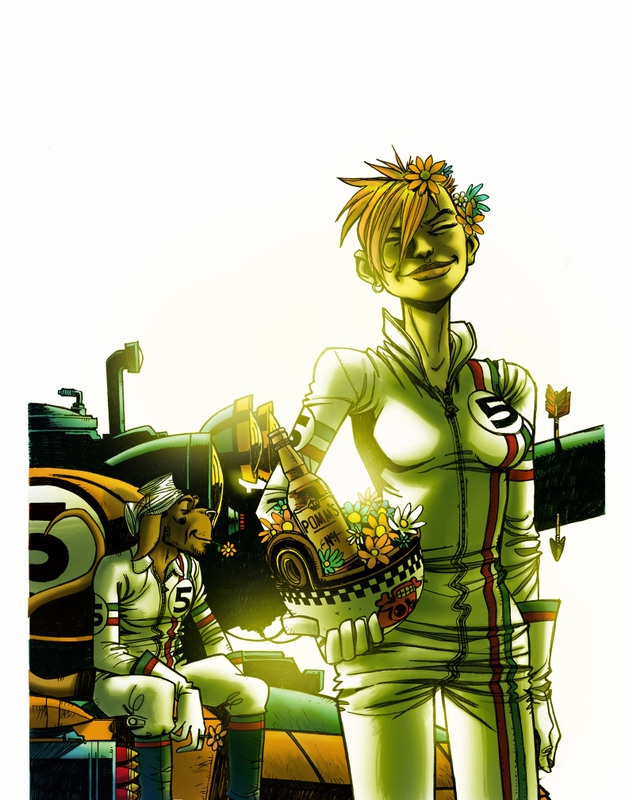 Ruf also penned some of the artwork for Lowlife, including Nixon's first meeting with Dredd. Below is a cool Nixon sketch... 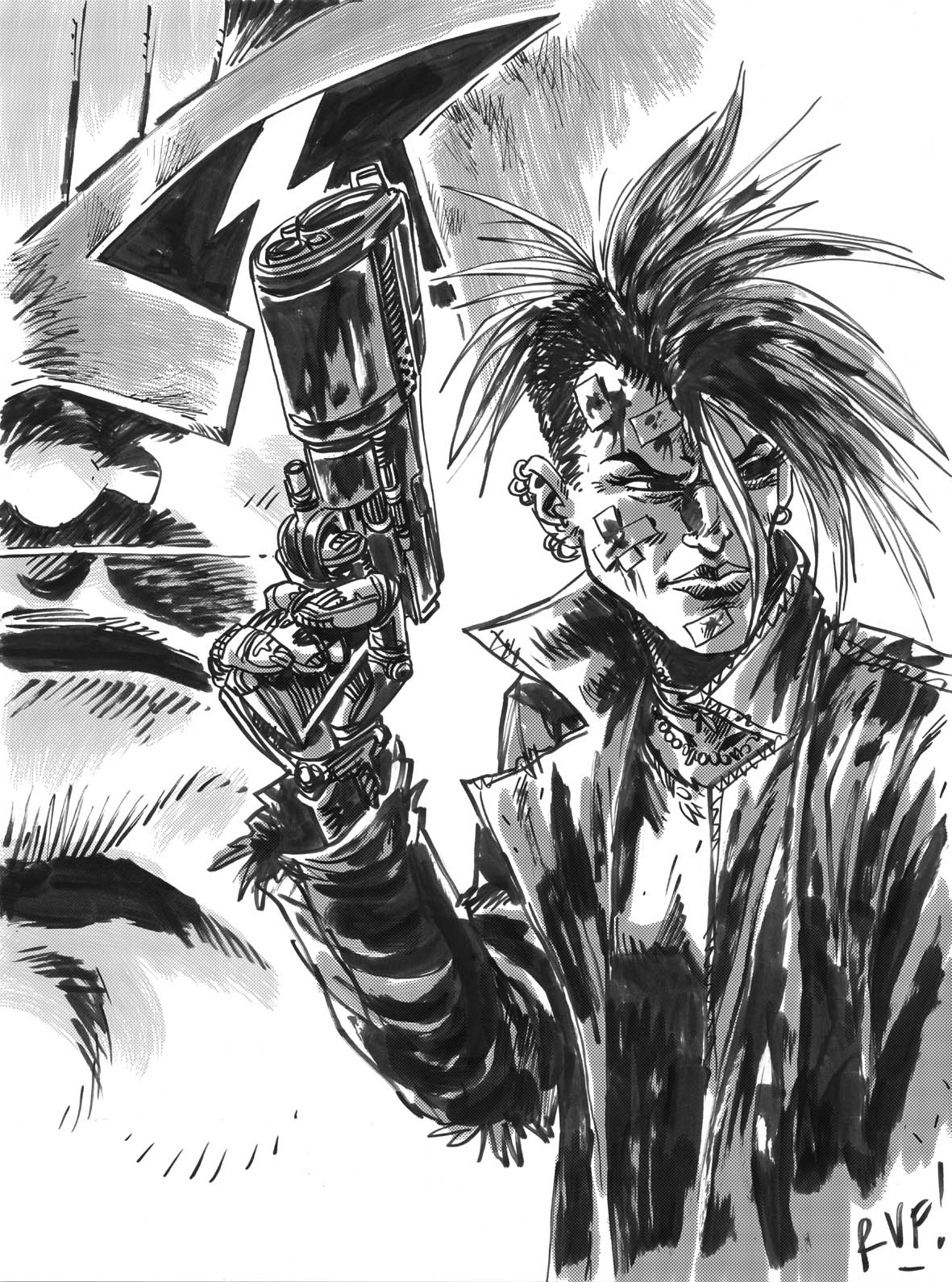 And the cover of Megacity Undercover 2... 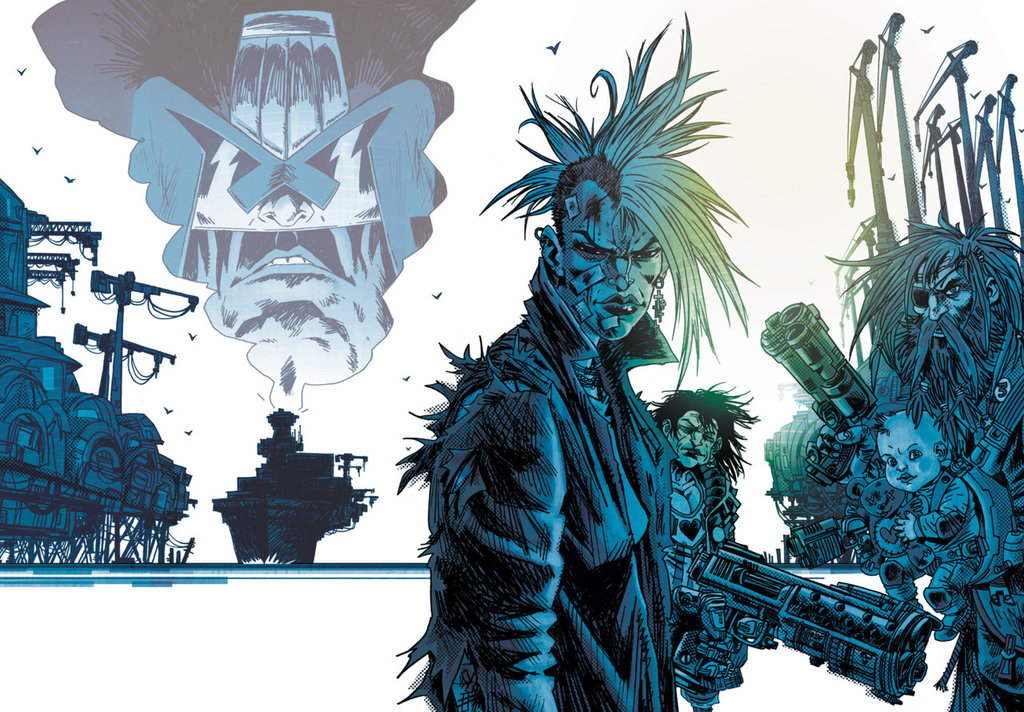 Penultimately, a brilliant Dredd image for the forthcoming 2000AD Sketch Book, obviously based on City of the Damned. I can't wait for this! 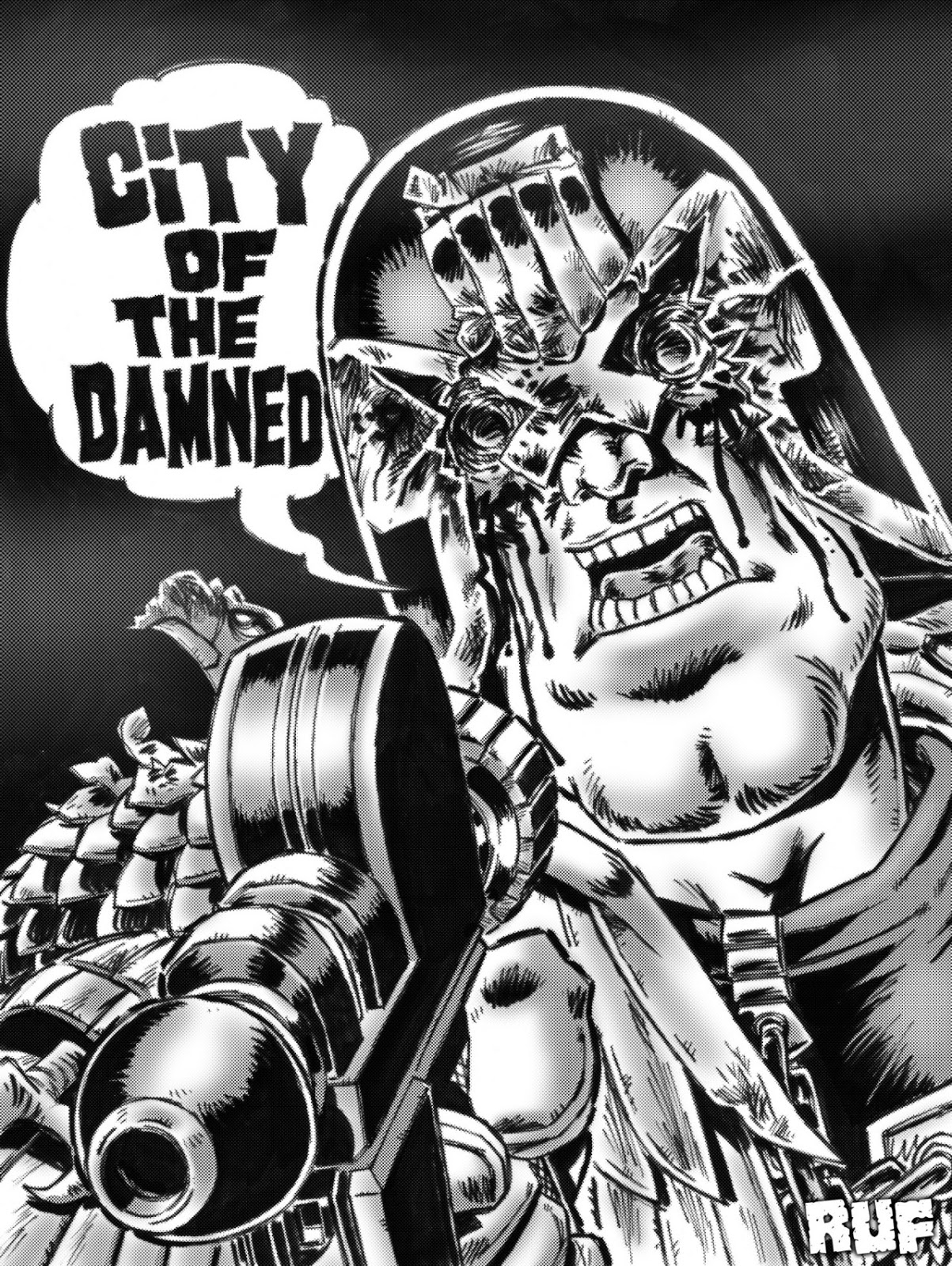 Should have gone to Specsavers.

HUGE thanks to Rufus for sending these images, especially as he was in the middle of moving to Germany when I got in touch. What a brilliant guy!

Before signing off, I wanted to share Rufus' gorgeous tribute to Brett Ewins who passed away last week. The man himself, surrounded by some of his most iconic characters, lovely... 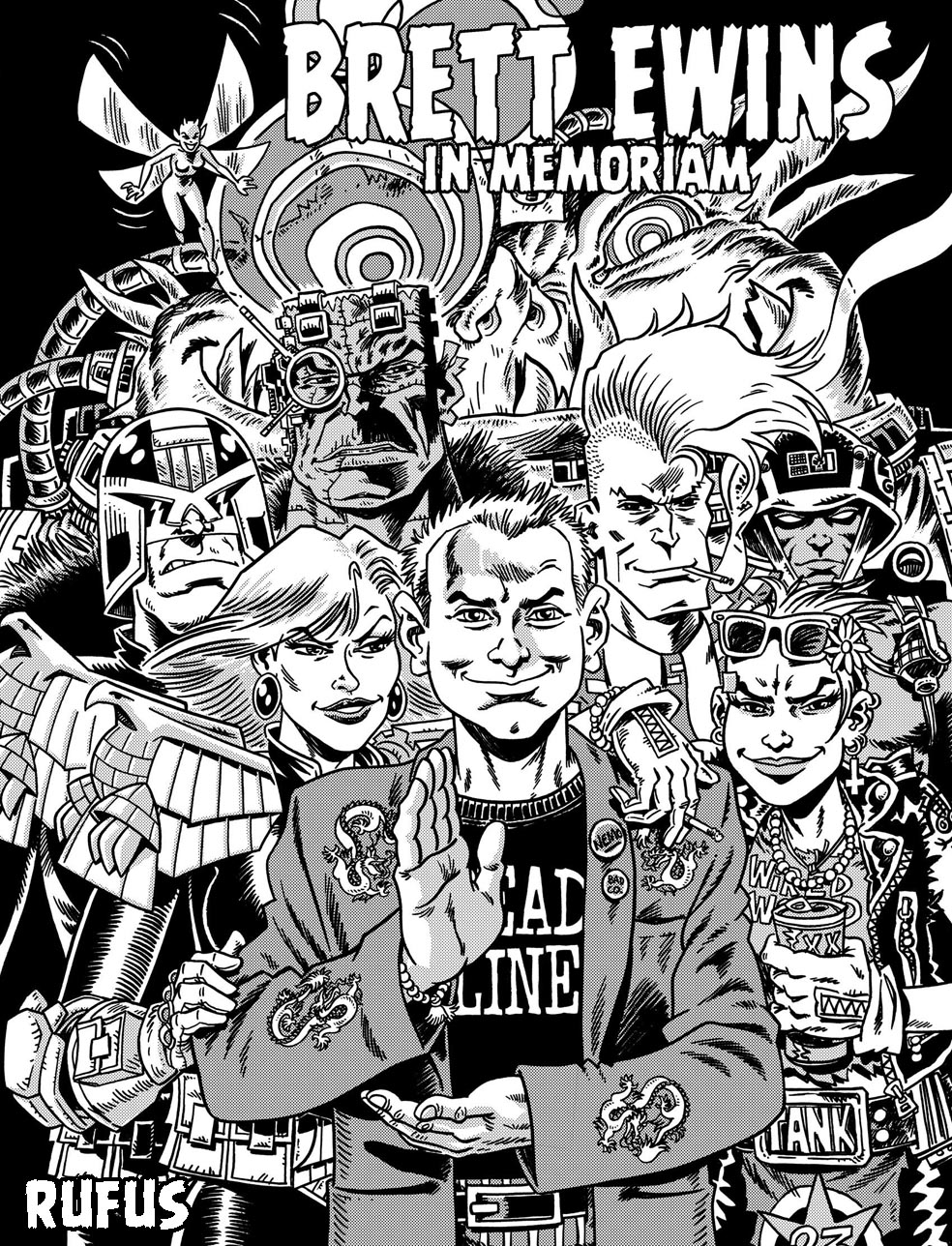