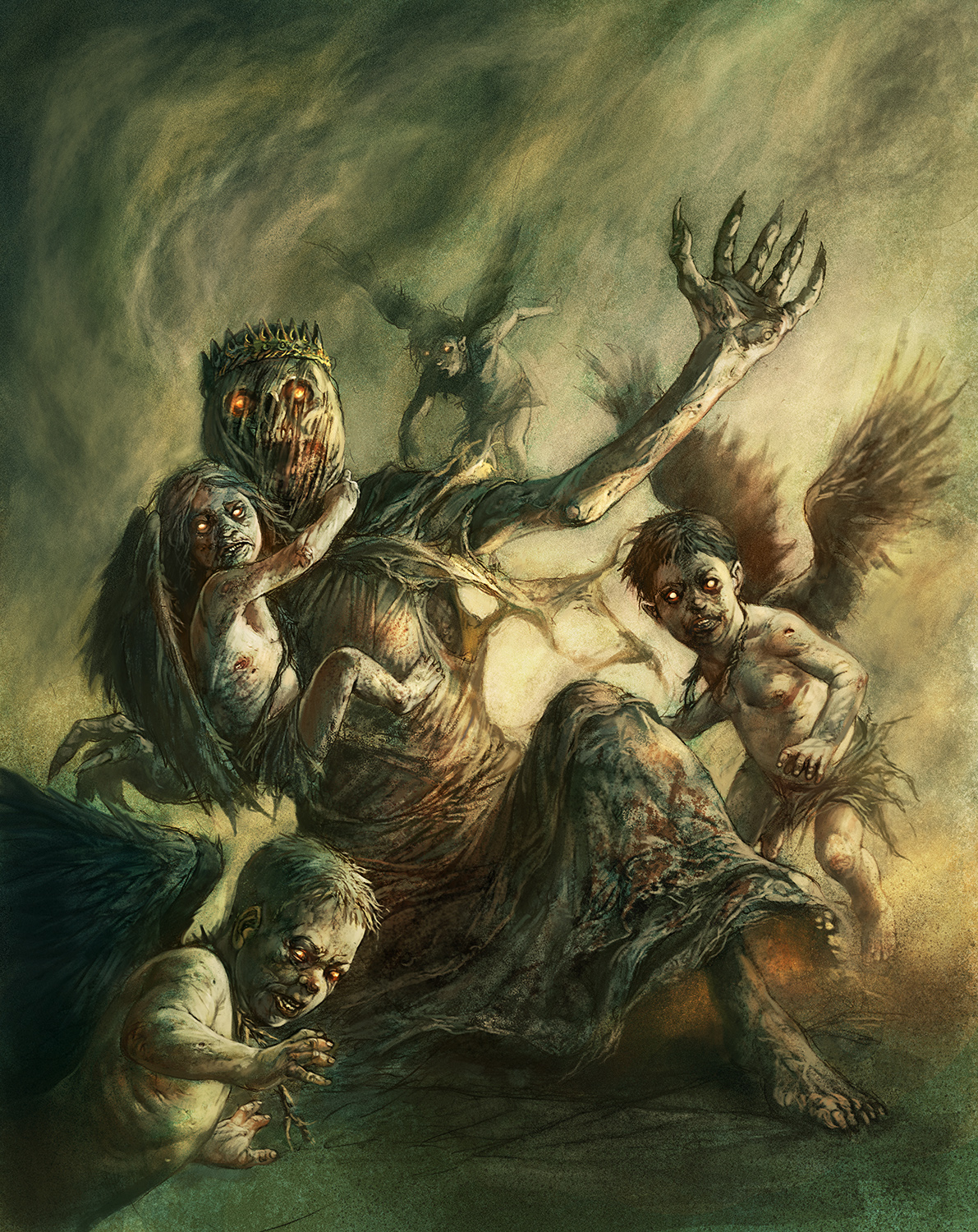 Well, this has got to be the creepiest cover of the year, if not the decade! Master painter Dave Kendall brings us this horrifying digital painting of Mater Clementia, the vestal virgin 'who bore a host of children in secret, drowning each of them at birth in the Tiber.' Stroppy cow.

Dave is the absolute master of horror so was the perfect choice to bring this horrid hag to life. Check out his terrifying paintings at his Rusybaby Studios studios for more, but please, don't have nightmares!

Over to Dave to tell us how this cursed painting dragged itself onto the cover of Prog 1898:

"This was heading into perfect horror territory for me. Not only was it spooky kids and their decayed Mummy, but it was designed by Leigh Gallagher so It was going to be fun!"

"Tharg asked me to base the pose a little on this panel. I was given a little more reference than this.:) " 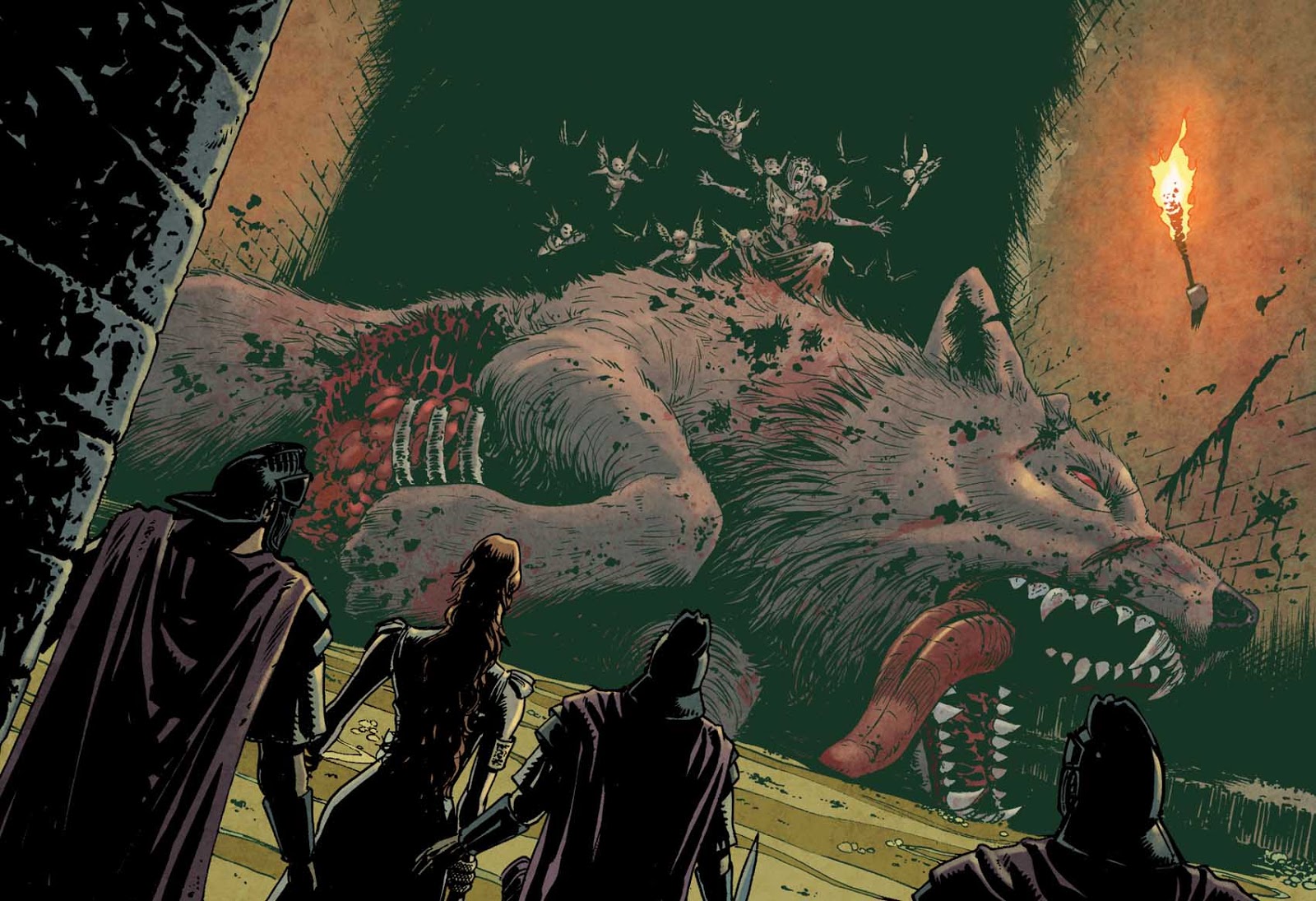 "That woman has just shit a dog!"

"It was a case then of sketching out an idea which would reflect this image. I came up with this image here. A strong central dynamic figure and a nice smattering of nasty winged cherubs. Tharg was happy with this so off I went..." 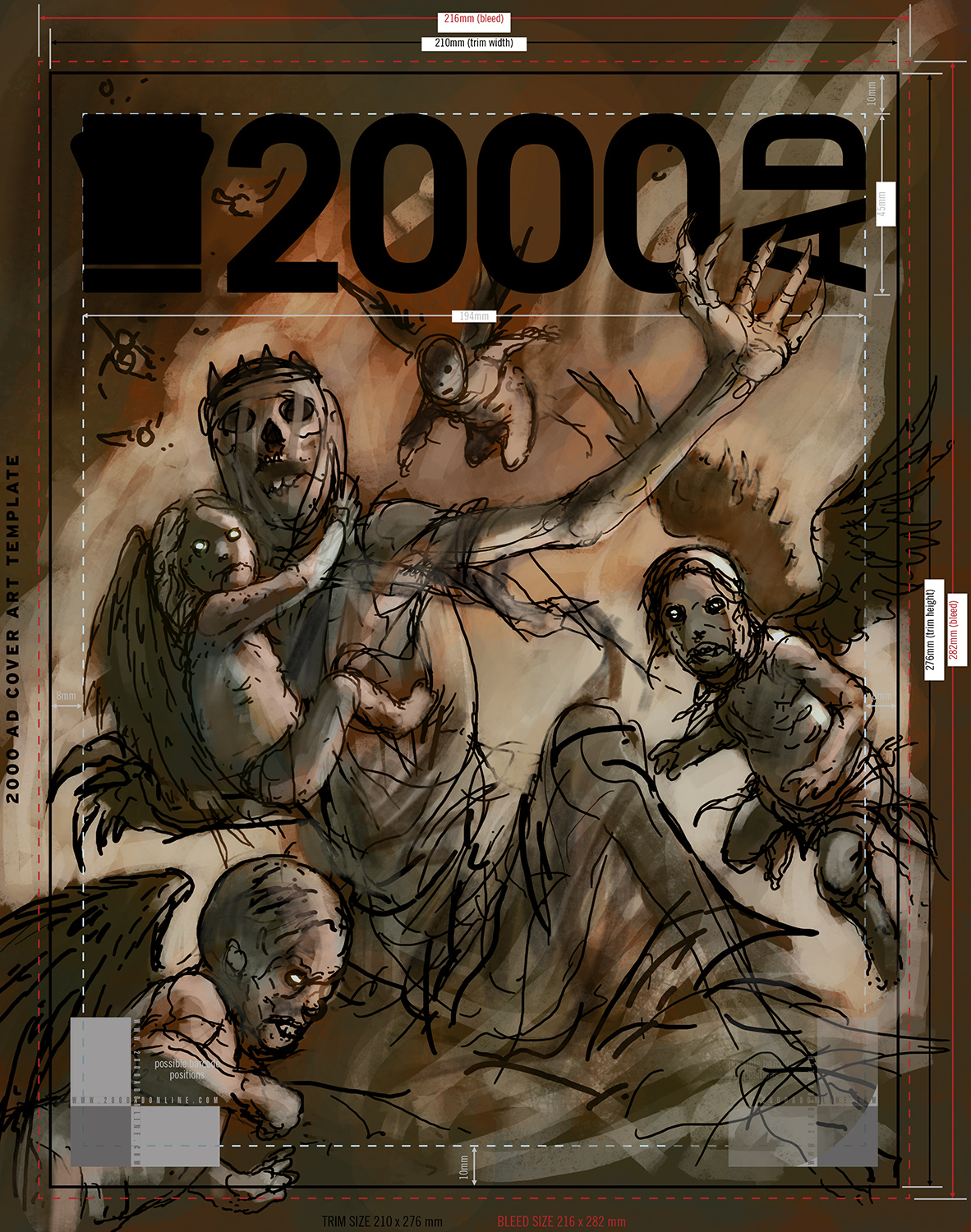 This cover is no laughing mater...

"The next stage was a properly drafted pencils." 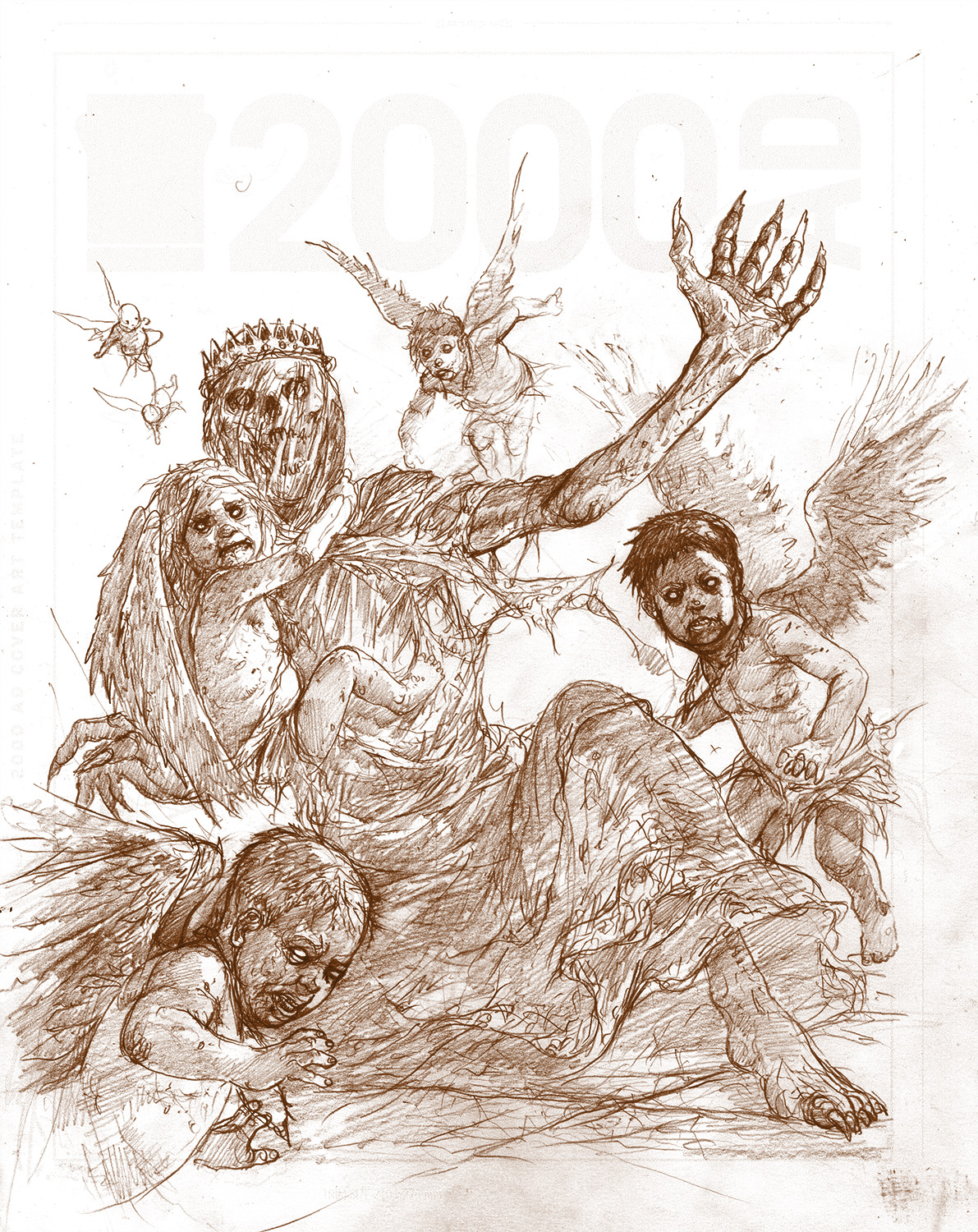 She's no mater mine

"Which I then digitally coloured to add lighting." 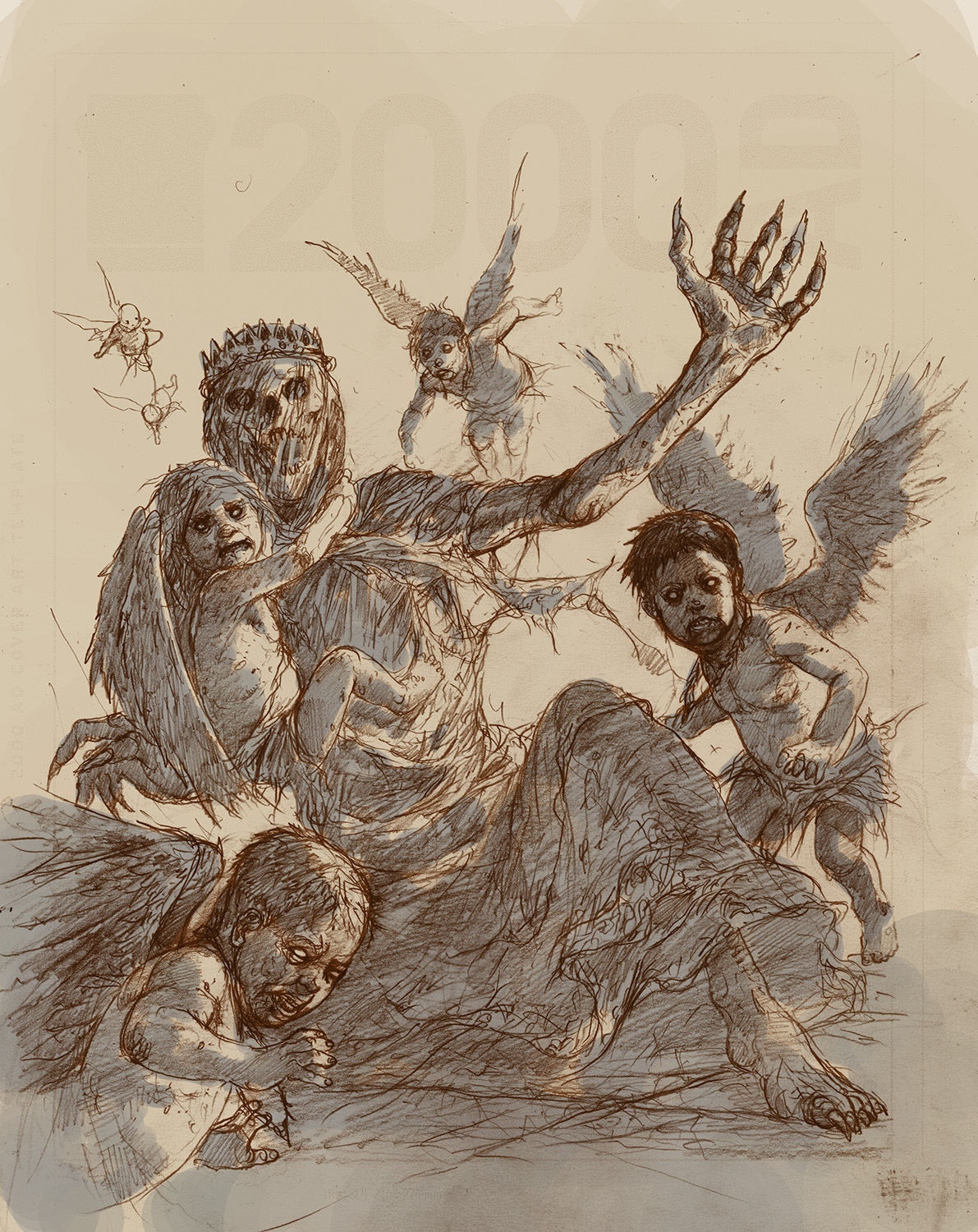 "Hands up if you're a murdering shit!"

"If you get to this stage much of the work is done. From this I worked up a colour scheme." 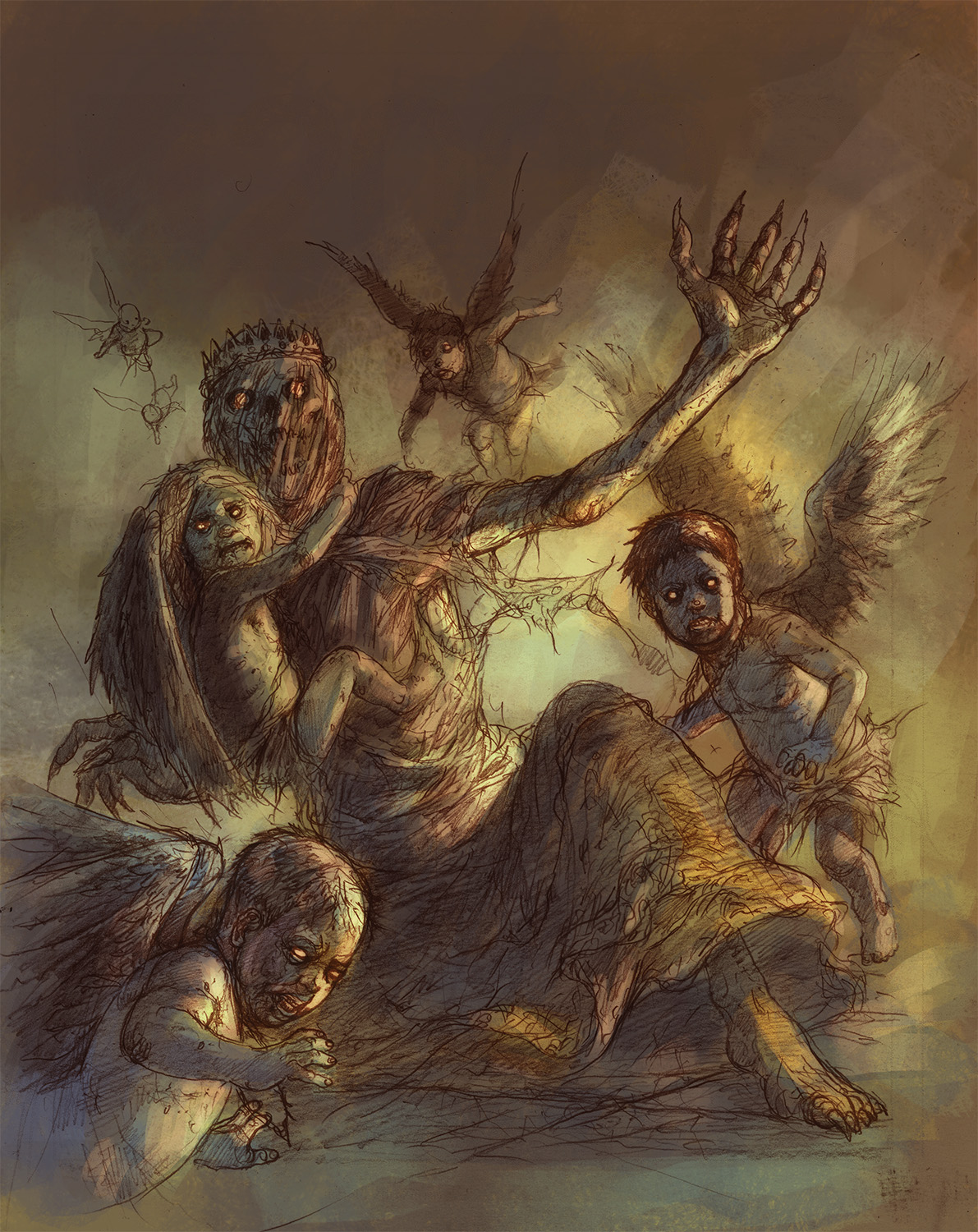 "This is where a bad workman not only blames his tools but blames the weather too. It was a very hot week the time I decided to paint this. It was going to be a traditional painting, in fact there is a traditional painting. Here it is. The heat and subsequent fan in my studio made painting this in acrylic almost impossible. The paint dried so quickly and I felt like I was painting with crumbling chalk. I abandoned it. I just was not feeling it. So as the deadline was approaching and I wanted to present an image closer to my minds eye I decided to return to digital." 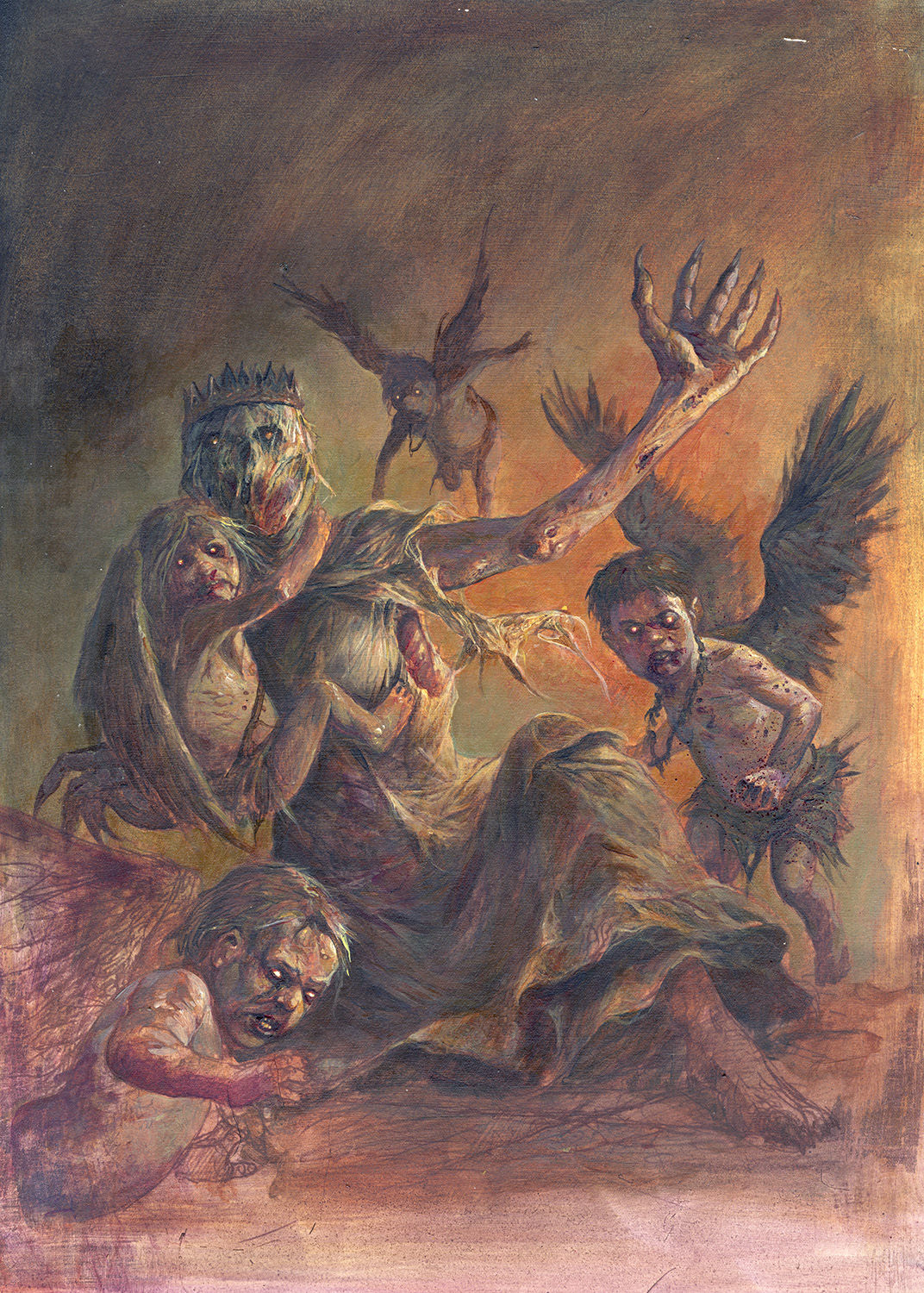 As you can see, Mater is wearing the latest Versace ragged bedsheet with matching bloody veil, slimy tiara and dead baby accessories. Very a la mode this season...

"Here is the first image I presented to Tharg. It went like a dream and I was so much happier with how it looked. When I work digitally it's exactly the same process as painting traditionally. The careful build up and modelling of colours until it's finished..."

"Tharg was very happy with this but asked if I could pop the image more so it stood out a little better. I tweaked the background and contrast and generally improved the overall silhouette of the various elements and presented what was the final approved image."

Amazing stuff! Here's how the prog looks on the shelf...

Wow, we are so lucky to have artist of this calibre working for 2000AD. I know Dave has a couple of other covers up his sleeve which I'm sure we'll get the scoop on! Thank you so, so much to Dave, a brilliant cover with a fantastic commentary. Remember to visit his site for more grisly goings on!
Posted by Pete Wells at 12:03