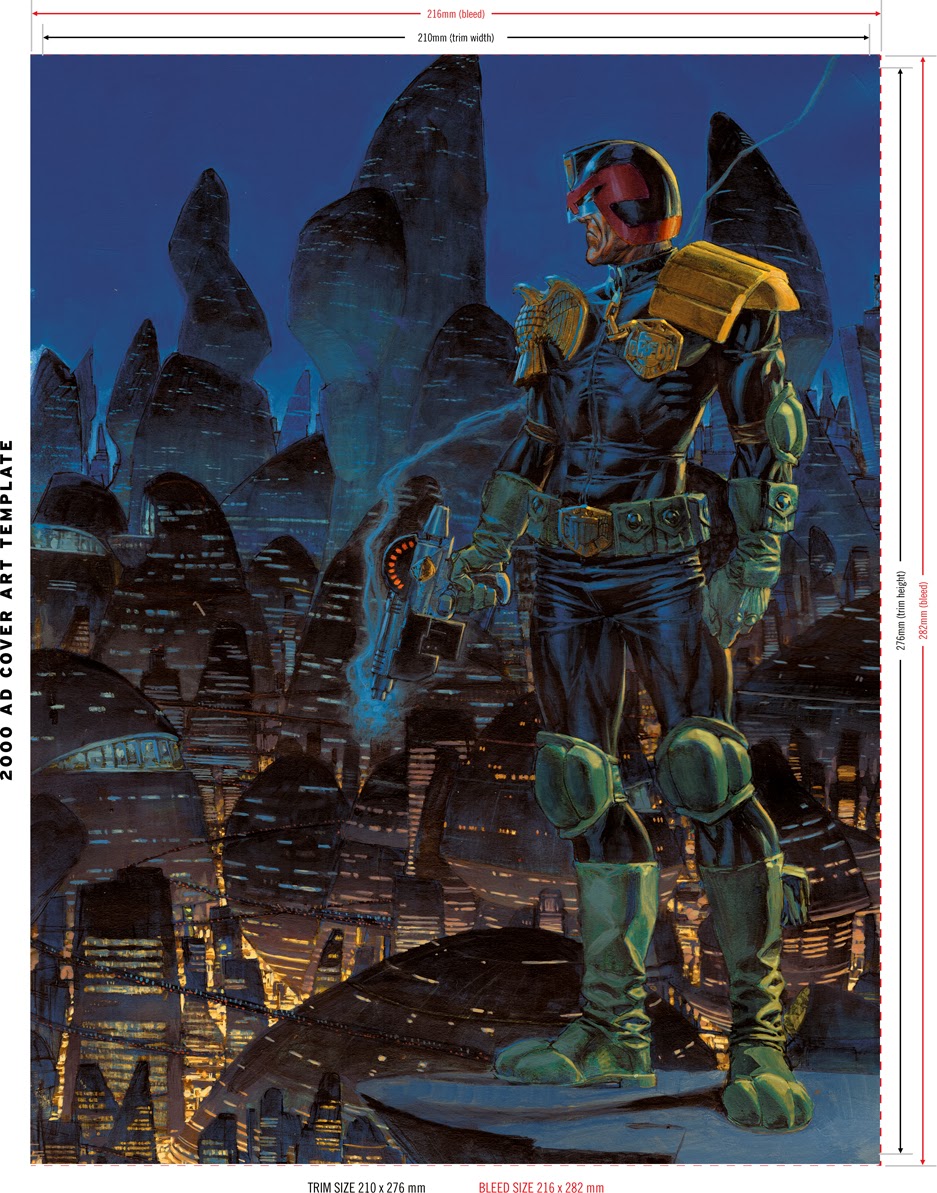 Love this Orwellian Megazine cover by Phil Winslade. It's got a marvellously moody feel and a fantastic retro vibe that really put me in mind of Down Lawrence's/Carlos Ezquerra's Brainbloom cover of Prog 18... 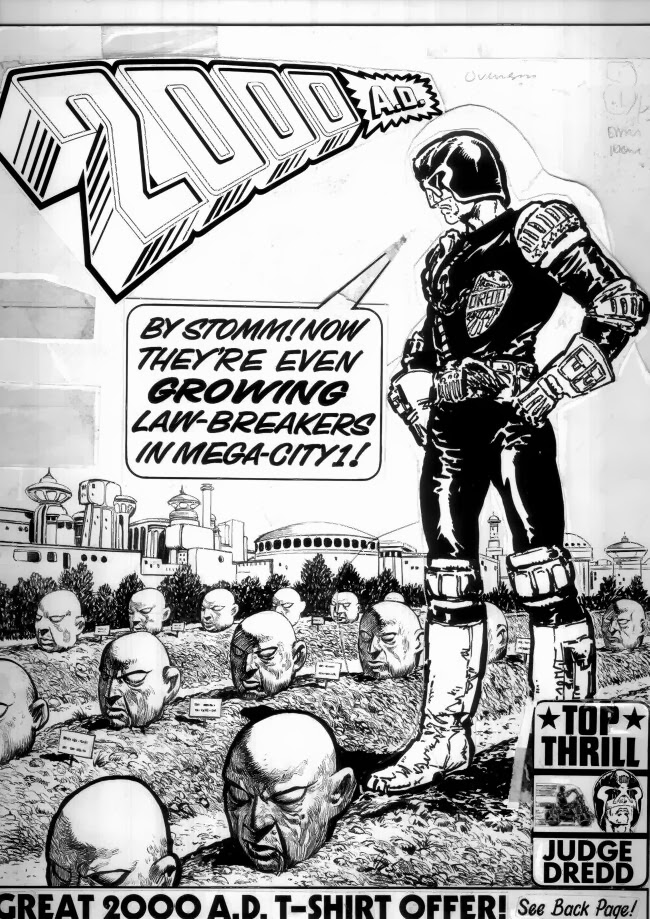 I mentioned this to Phil and found that he has a real soft spot for retro Dredd, particularly Ian Gibson's biker version. He said "Yeah the classic vibe. I've always preferred Dredd when he's more of a 50's British biker bullyboy..." which can be seen in this cracking sketch he did: 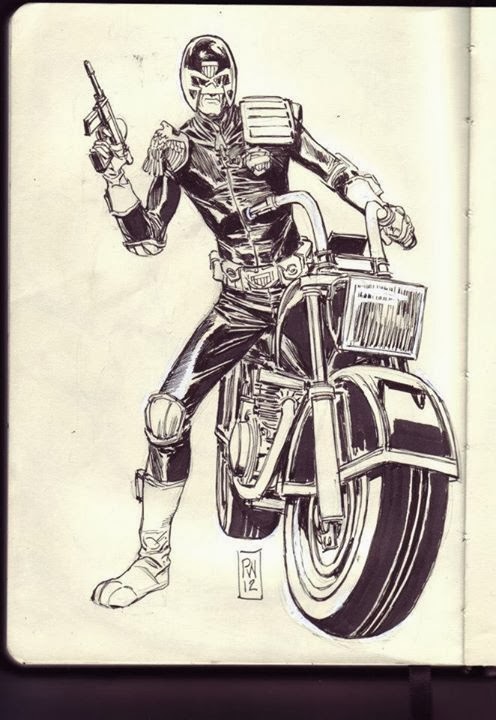 Dredd gets ready for the Mega-City 5000

Phil provided some outstanding art for one of my very favourite Dredd strips, Prog 1650-1651's 'Caught in the Act.' The story, written by John Wagner, is a searing critique of the erosion of our civil liberties under controversial bills such as the UK's Terrorism Act of 2000 and the USA's Homeland Security Act.

The strip saw hapless Dudly D Dudson of David Blunkett Tower busted, interrogated, violated and cubed by Dredd and a crack team of judges for unspecified crimes under the 'Security of the City Act.' 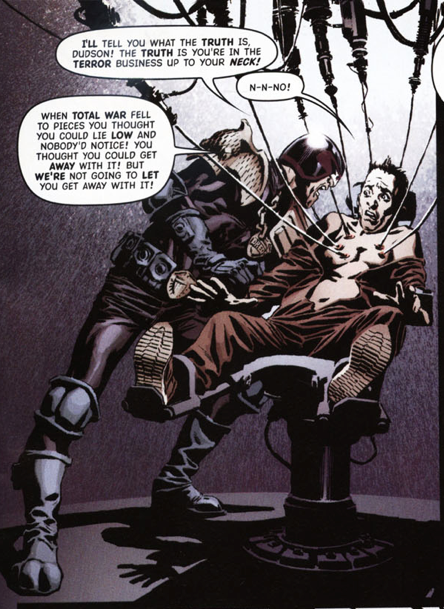 Truth!?! You can't handle the truth!

Among Dredd's team were the brilliantly named Judge Belmarsh and a little known recurring character Judge Skerrit. The latter, moustachioed judge is a little too eager to perform cavity searches and is a cheeky joke on a certain, similar sounding Andorran artist! Skerrit prepares to get elbow deep in 'Caught in the Act...'

And again in 'Slow Crime Day.'


Poor Dudson's is brutally interrogated until he finally breaks and confesses to a string of unspecified charges. Under the Security of the City Act he is sentenced to indefinite incubement. However, it is later discovered that there was a clerical error and Dredd has arrested the wrong man... 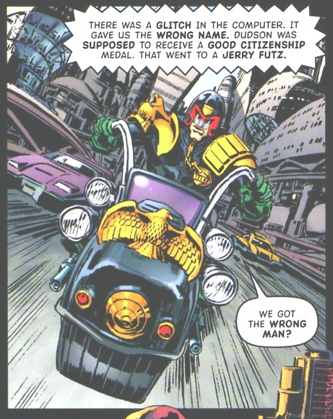 Dredd Futz it up!

Dredd frees Dudson and, under the Security of the City Act, gives him paltry compensation for his distress. However, poor Dudly is placed under indefinite house arrest until the unspecified crimes he confessed to could be disproved. Just another day in MegaCity One! 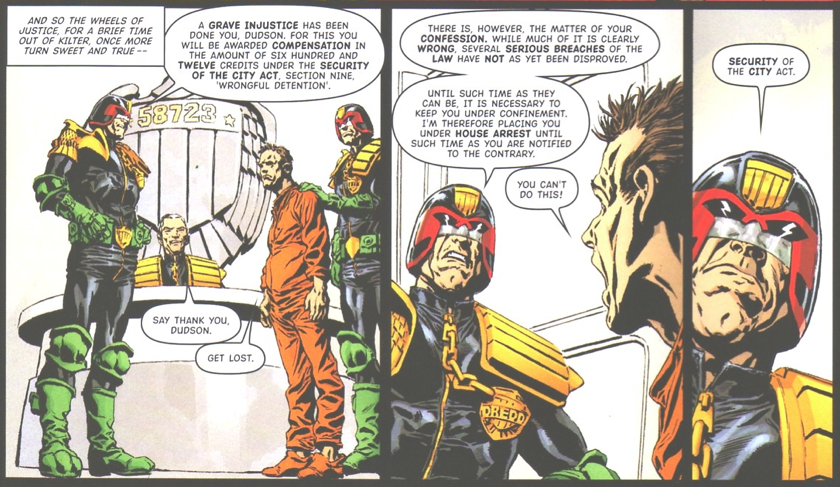 A true Wagner twist right there!

Below is Phil's mean and moody sketch for the cover... 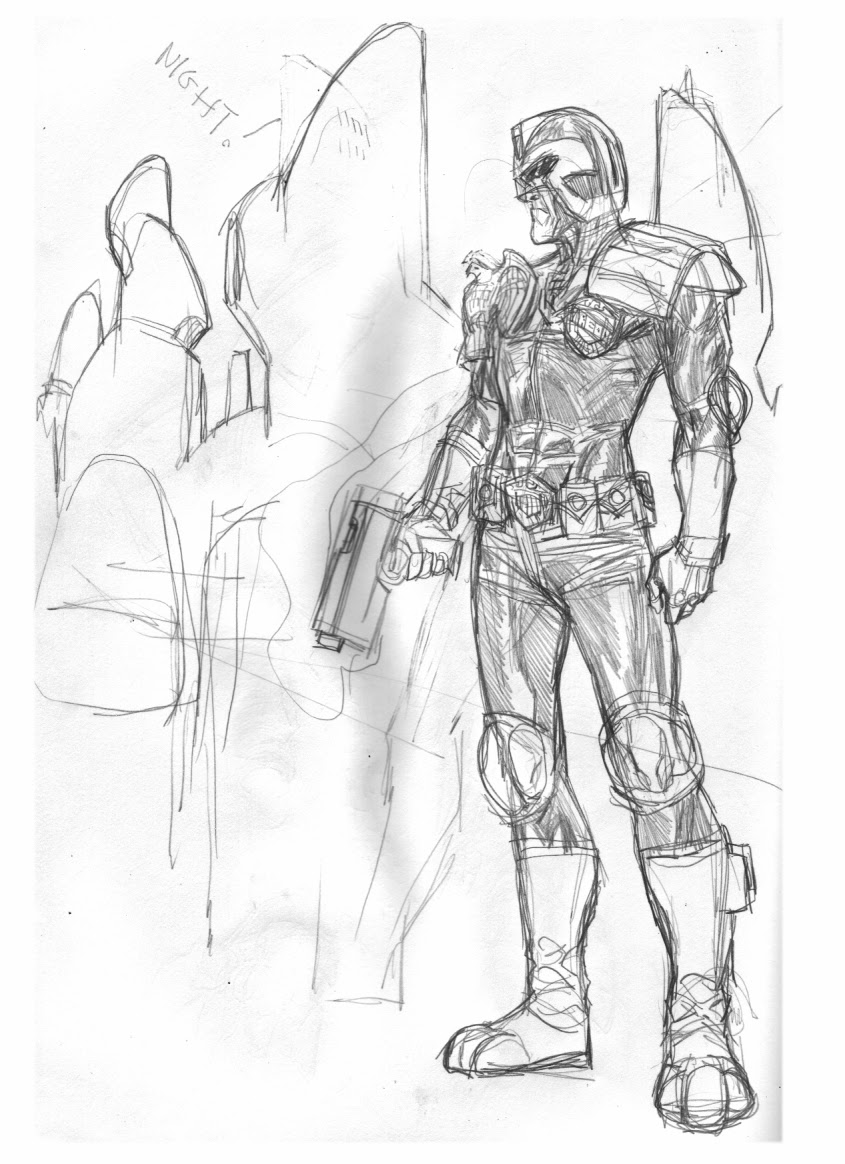 Is that a Stallone Lawgiver there?

The sketch is tightened up to make these rather lovely roughs... 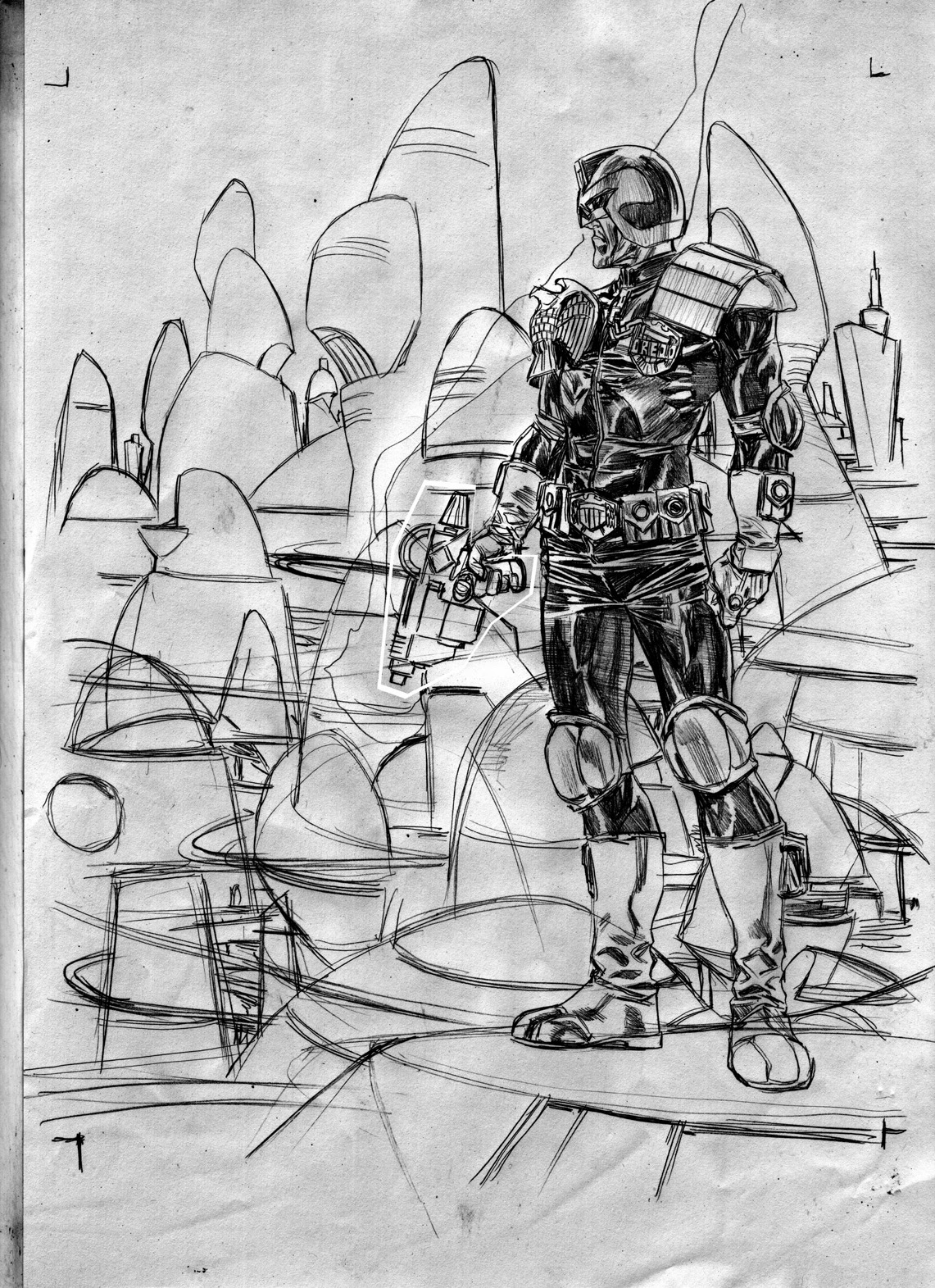 Who watches the Lawmen?

Next up, Phil's cartoon... wait, what!?! Phil explains "I mean cartoon in the classical art sense - basically the transferred image that I painted on." Oh! I knew that, honest guvnor... 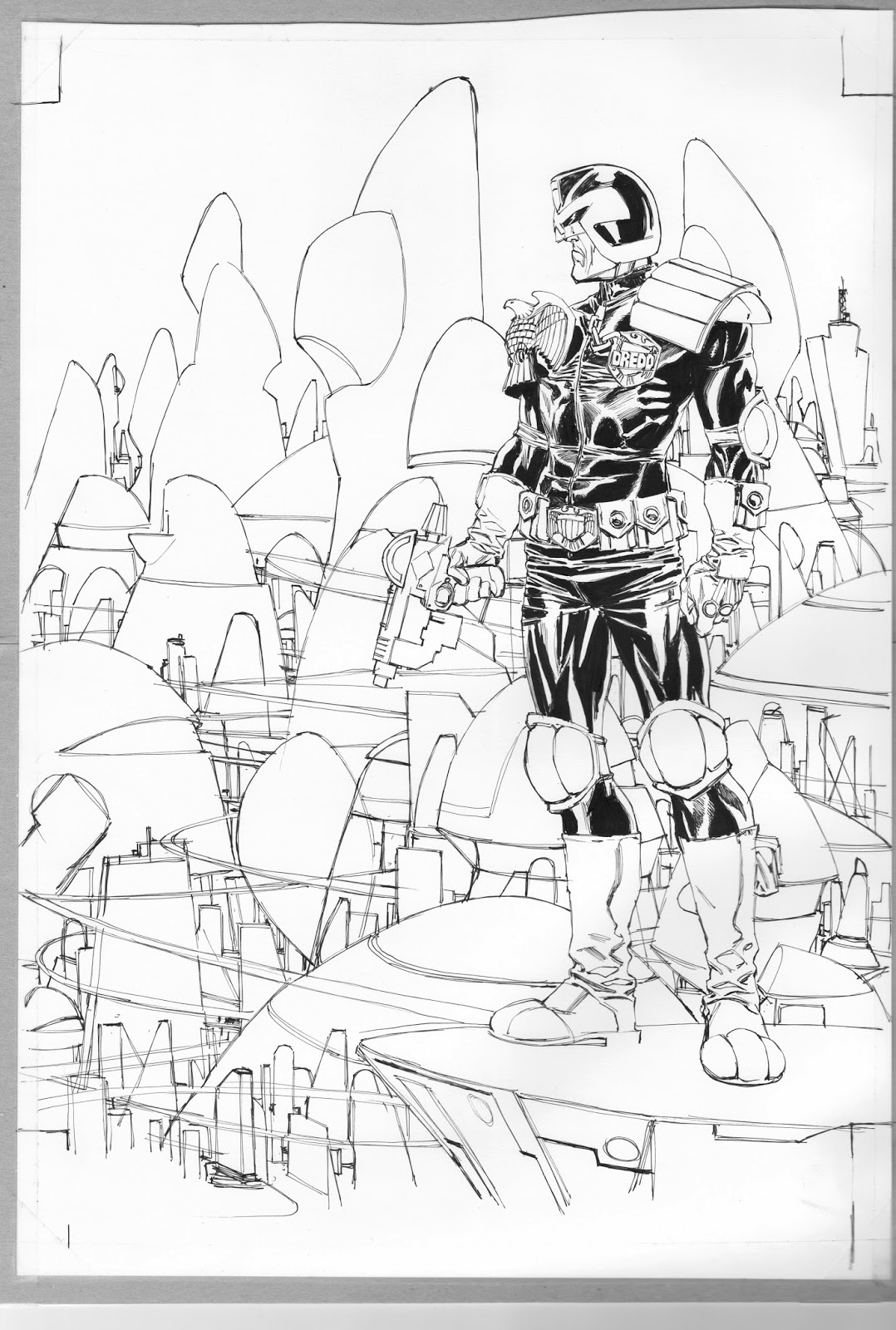 And finally, Phil's coloured version which is "Painted in acrylic with paintbrushes and the like!" Which I'm sure you'll agree is a nice change!

Here's how the cover looks on your shelf. Having seen the paper version, I'll agree with Phil that it's printed a little dark so it's great to see the image on a nice bright monitor! That's one heck of a big tagline too... 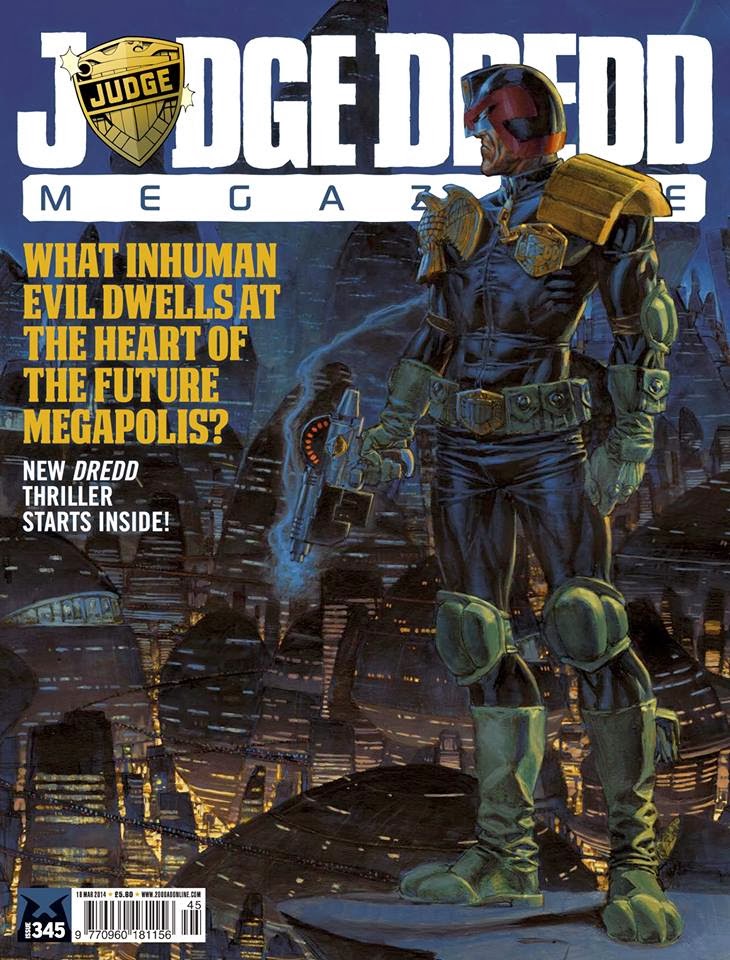 "Aaaand, the award for longest tagline goes to..."

Coming soon from Phil and Dan Abnett is Lawless, which is set in the Dredd universe. Hmmm, I wonder what that's about then? 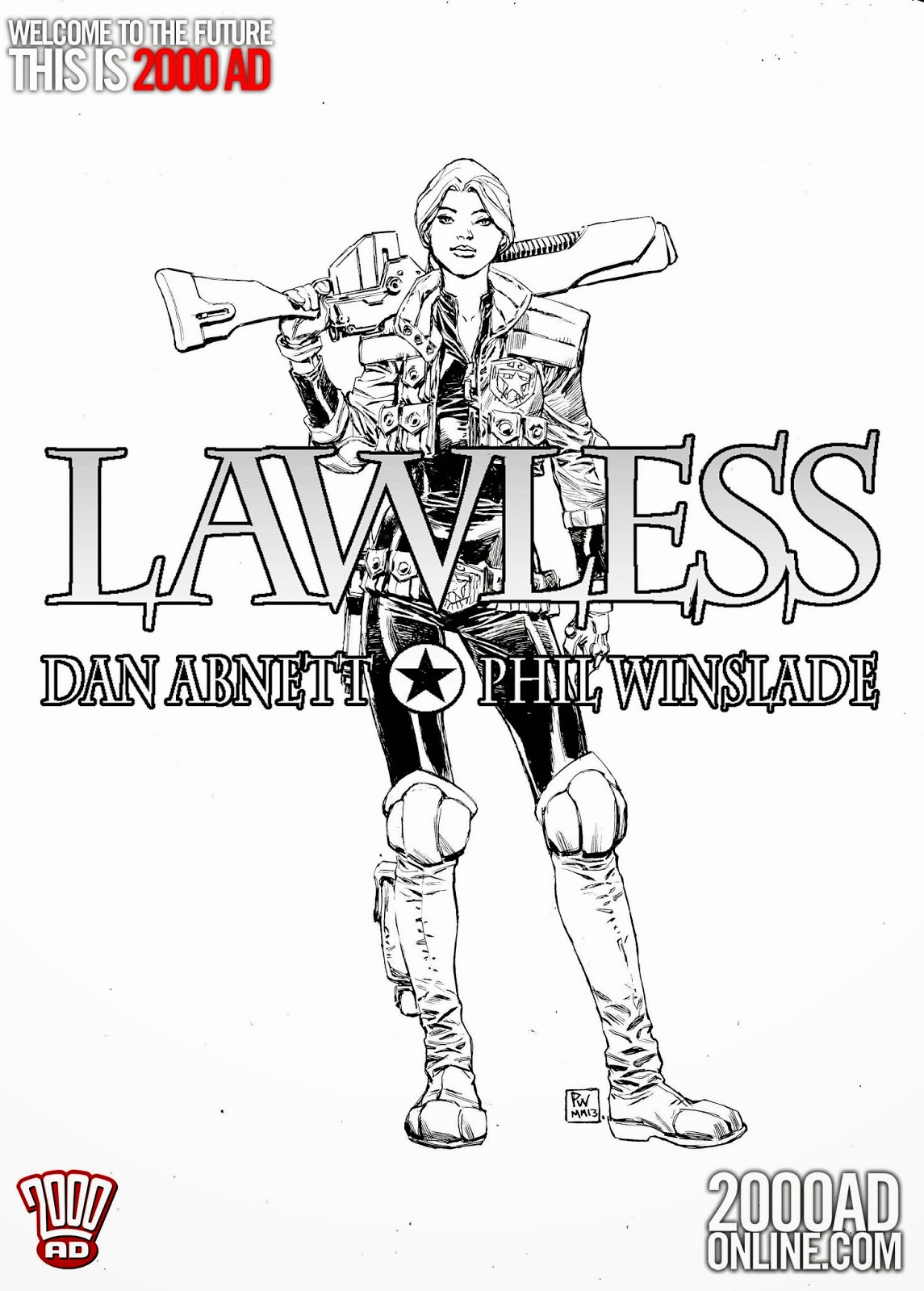 HUGE thanks to Phil for sending the images, it's great to have him back in the prog and I can't wait to find out more about Lawless!
Posted by Pete Wells at 23:48