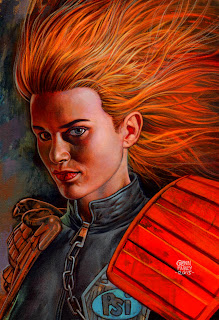 Ex-Psi-Ting!
She knows what you're thinking and so do I - it's fantastic to see double Eisner Award winning artist Glenn Fabry going back to his roots and providing a beautiful cover for 2000AD! Glenn began his professional comic career waaay back in 1985 working on the Slaine epic Time Killer, providing the cover as well as interiors for his debut prog - no pressure there then!
Below we can see that first ever cover, Prog 411, which featured classics such as Slaine, Dredd: The Hunters Club, Halo Jones, Rogue Trooper and erm... Hell Trekkers.
﻿ 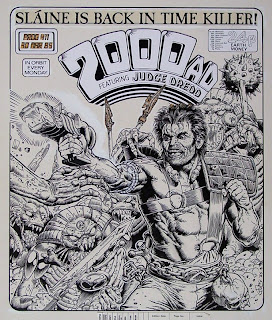 He didn't think it too many.
The great news is that Glenn will be returning to Slaine to celebrate the 30th anniversary of the character in August. Glenn, along with much loved artists Mick McMahon, Simon Bisley and Clint Langley will all be contributing to episodes to a special story, 'The Book of Scars.'
Speaking of Bisley, here's the cover he helped Glenn on when the artist was stranded in California due to the Icelandic Volcano Ash crisis in 2010. An absolute beauty and a really nice companion piece to this weeks' cover... ﻿ 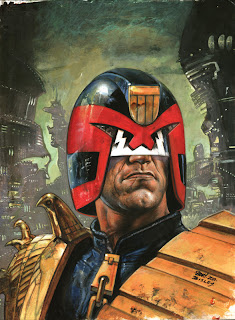 Drokkin' Ash
As well as Slaine, Glenn worked on Judge Dredd, a Future Shock and the luscious Dredd and Batman team up Die Laughing for the house of Tharg. He also provided several covers, including the first ever Judge Dredd Megazine... 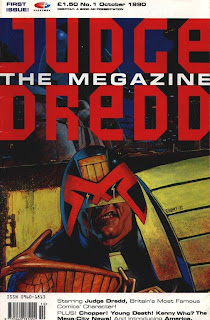 ﻿Ah, the memories...﻿
Glenn also worked on Revolver, Crisis and Deadline where he began a fruitful partnership with Garth Ennis. This led to a host of award winning covers for Preacher and Hellblazer as well as interiors for several comics including the Authority and Thor.
The cover for this weeks' prog heralds the welcome return of Cadet Anderson by Alan Grant and the mighty Carlos Ezquerra. The story sees Anderson leading a squad of psychic cadets investigating sickening corruption at an orphanage. This story is gonna get nasty...
﻿

And here's how the cover looks in your local thrill merchant... 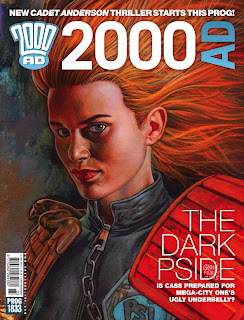 Buy this today!
I'm absolutely delighted to see Glenn back on the prog and can't wait for the Book of Scars. A huuuge thank you to Glenn (and Andy) for sending the image, it's fantastic! Please check out his website at http://www.glennfabry.co.uk/home.htm for lots, lots more!
﻿
Posted by Pete Wells at 14:31