D'Israeli - All hail the new pope! 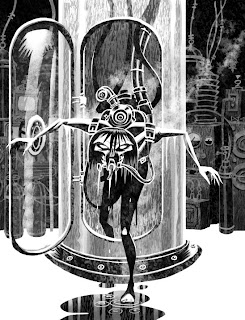 With his omnipotent grasp of terran past, present and future, the Mighty One did indeed foresee events transpiring in Rome last week. On the very day white smoke rose from the Sistine Chapel at the Vatican, green smoke was seen wafting from chimneys of the Nerve Centre. This signaled a scrotnig new cover by D'Israeli, featuring the Pope of Crime himself, the enigmatic Stickleback!

The kingpin of crime was last seen plummeting to his apparent death from the airship of Irena Bernoulli in the heart stopping climax of London's Burning... 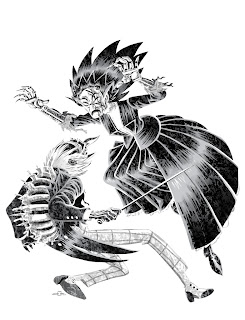 Stickleback: Number of the Beast is set five years after the villain's last adventure and sees a very different London. What dangers will the mysterious Stickleback face this time?

As ever D'Israeli has been ludicrously generous with his time, giving us a highly detailed, fascinating breakdown of the cover's creation. This time, he has even included an instructional video showing how he uses his grot textures, amazing! Without further ado, it's over to the D'emon D'raftsman himself...

"As ever, I started with a loose brief for a cover from Matt Smith:

"Maybe a movie poster-type montage of SB surrounded by the dinosaurs? Or a sinister shot of SB stepping out of the tank towards us, like Jeff Goldblum emerging from the teleport pod in The Fly?"

"01-03 - I generated three cover roughs, two of the tank (one with Stickleback concealed inside in case we wanted a publicity image that didn't give away his new look) and one with dinosaurs. For the two tank shots I used the same background with different foregrounds drawn in. Matt picked number two, Stickleback emerging from the tank." 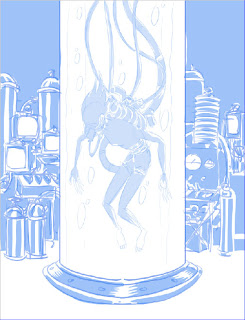 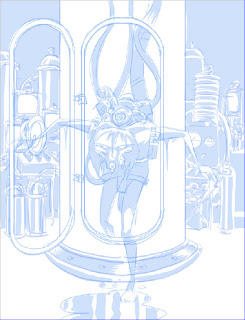 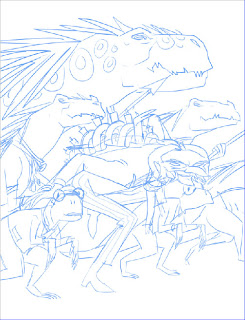 "04 - Pencilling - I only pencil the foreground figure, as everything else is precise enough in the rough (you won't care if one of those machines in the background had two or three dials on it, but you'll notice straight away if Stickleback is a little bit out of proportion or has the wrong number of eyes :-)" 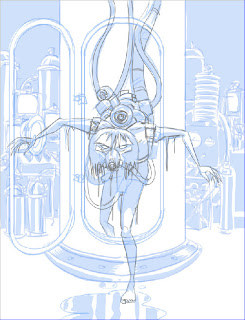 "05-09 I draw in blocks of colour that will act as masks for the textures in the next step. The blocks are drawn using the Lasso Tool (no anti-aliasing) for very sharp edges, then filled with colour using Edit: Fill (Cmd/CTRL+U in Manga Studio) These colours won't be seen at the final stage, so I don't try to make them realistic; they just need to be different enough from each other that Photoshop can select them individually. I've included the different stages of blocking in the colour; each of these is on a different layer so I can add or remove stuff without affecting the layers above and below." 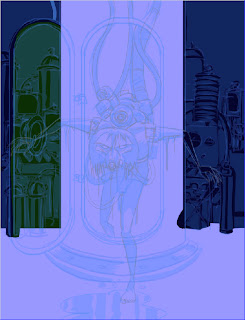 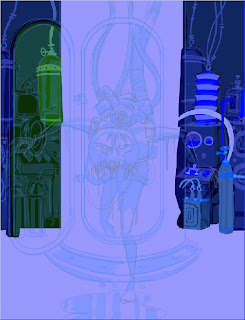 06 - Masks are added to some of the background details 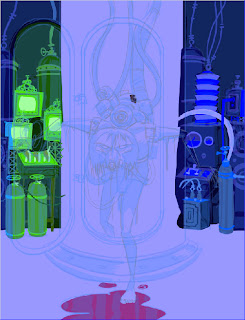 07 - Oh oh, Stickleback has just stood in something... 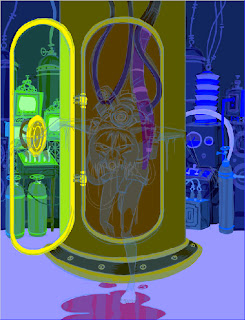 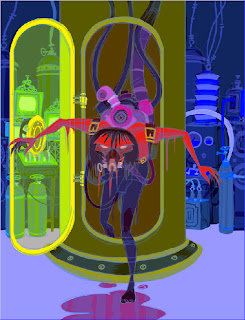 "When this stage is done, I export to Photoshop format."

"Manga Studio works natively at 600dpi; that makes for unwieldy Photoshop files, so I downscale the file to 400dpi using Image: Image Size… (Alt+Cmd/Ctrl+I), with Resample Image set to Nearest Neighbour (preserve hard edges) which gives me nice sharp edges for the selection tools to grab. The 400dpi resolution will keep everything nice and sharp looking when the file is printed.
I also add a white layer between the colour blocking and the drawing textures; this lets me see the image as it will appear when finished, but I can hide it to get at the colour blocks to make masks."

10 - D'Israeli has very kindly made this YouTube video showing how he uses the Lasso Tool and the Sample All Layers option of the Paint Bucket Tool to add textures to the image using colour blocks as masks. What a brilliant guy!

"11 - Textures only. There are two sets of textures, one at 100% opacity, and another, on a separate layer, at 50% opacity to give textured greys (both layers set to Multiply so stuff will show through underneath them when I add it later). As you can see, the textures alone look like an indecipherable mess. Most of the work after this stage will be making a "readable" image out if this mass of textures." 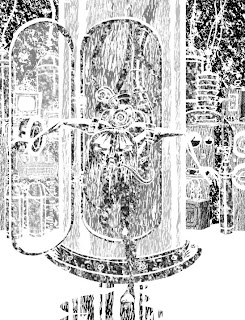 11 - The scary thing is, the D'Israeli droid's advanced software upgrade means his CPU can make sense of all of this!

"12 - Under-filling the textures with grey. Since the two sets of textures are on separate layers, I can make selections out of the textures using Photoshop's Select: Load Selection with Channel: Layer Transparency picked. This might sound complicated, but put simply, Layer Transparency grabs all the stuff on a given layer and selects it. No matter how complex of faffy the outline - bang! Instant selection. The only drawback is there's no fine control; you get everything on a given layer, which is why I made sure the 100% and 50% textures were on their own layers earlier."

"So I use this method to make selections out of each of the layers in turn, then on layers underneath, fill those selections with grey (mid grey for the 100% textures, pale grey for the 50%). I paint into the selections a bit too, to break up the uniformity a bit. The texture layers are transparent (Layer mode = Multiply) so the greys show through."

"Straight away the drawing becomes much clearer." 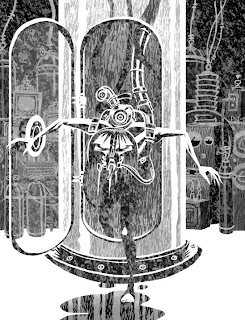 "13 - Blacks. Same trick with something extra added; I want to paint over the 100% textures (and only the 100% textures) with scrubby, painted-looking black that will help to define certain bits of the image, but still leave some of the texture showing through. So, first, Select: Load Selection with Channel: Layer Transparency selected gives me a selection of the 100% textures. Go up to a new layer, fill with white ("What?!?"). Set the layer mode of this new layer to Multiply, then check the "Preserve Transparency" checkbox."

"Why? Setting the layer to Multiply makes the white fill transparent (so invisible), and Preserve Transparency locks the layer so you can only paint on those invisible pixels. I know where the shading's going to go (because it corresponds exactly to the textures that are visible underneath), so I can bash away with a big Brush loaded with black and it won't go anywhere except over the textures. I scrub in the black, selectively darkening areas (I can even use selections based on the colour blocks on the bottom layer to control where the black goes precisely)."

"Now you can properly see what you're looking at - Stickleback stands out from the tank nicely. Everything after this is refinement." 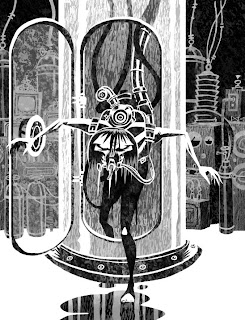 13 - The criminal mastermind gets even darker!

"Painter is a graphics program similar to Photoshop, but specializing in simulating the texture and brushstrokes of real media like watercolour, charcoal, crayons and so on. Painter will open Photoshop files, so there's no need for any sort of export process. It can produce some spectacular effects, but the extra processing power needed for those "real" brushes means it runs s-l-o-o-o-w-w-l-l-y-y on the sort of high-resolution print files I work with. Thus I use it for adding an layer of finish to stuff I do in Photoshop, and I try and keep my use of Painter to a minimum.

14 - I use the Watercolour Brushes in Painter to soften up some of those hard edges on the texture blocks, and add just a little detail to the areas of plain white. Again, I use selections based on the colour blocks on the bottom layer to constrain the painting and speed the process up (I started out as an airbrush artist and old masking habits die hard).
The effect on this cover is quite subtle, so here's a "before-and-after" close-up showing the painting on the face." 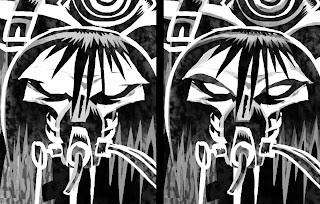 "15 - Full view of the cover with painting added." 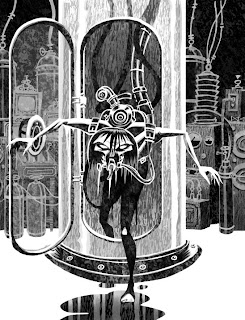 15 - Old Stickleback is such a loveable looking fella isn't he?

Back in Adobe Photoshop

"16 - On a new layer (set to Multiply) I've darkened down the cylinder (a little) and the background machines (more) to pull the figure of Stickleback forward." 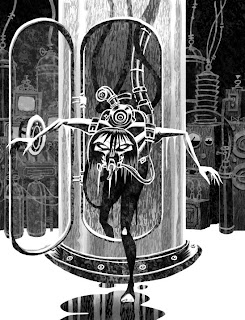 16 - Making the background almost as dark as the character himself... 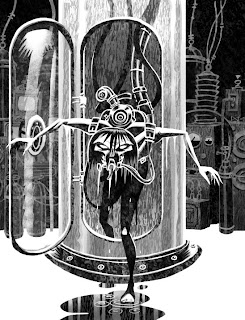 17 - Nice of D'Israeli to give the door a polish before he finishes.

"18 - Finally; vapour coming off Stickleback to pull him forward even more. Painted in using my own variant of the Photoshop "leaves" brush - I use this all the time for everything from steam to fire to grot on walls and floors. It's a great way of painting in shading without getting that over-smooth "digital" look."

And here's how the cover looked on your newsagent's shelf: 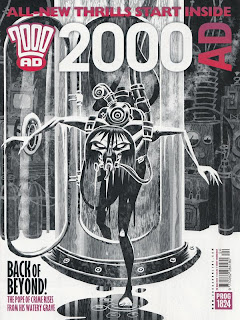 Wow, what an absolutely astounding commentary by the three times winner of the Cover of the Year vote. A HUGE thanks to Mr Brooker for once again putting an insane amount of work into a post for this humble blog. That fantastic video is the icing on the cake and the good news is he's promised more! He has another two covers to come in this series of Stickleback and you'll be able to read all about them right here!

PLEASE do yourself a favour and check out D'Israeli's Blog, it really is a marvellous, exceptionally informative read.
Posted by Pete Wells at 03:50