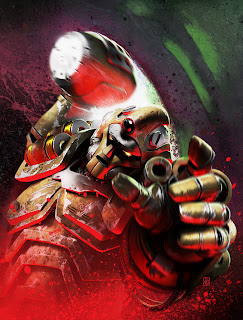 CLANGGGGG! Neil Roberts is back with an amazing companion piece to his Savage Blackblood cover of Prog 1745 (shown below.) You can see how that was put together here. The Gurnmeister General has crafted an incredibly dynamic image that again shows the dying seconds of an ABC Warriors victim. I do hope he gets to illustrate all of Meknificent Seven in this way as I love these covers! 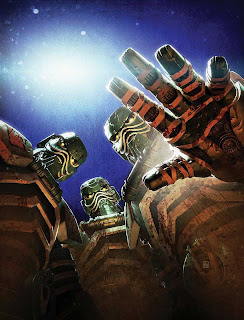 The terrifying cover of Prog 1745.

Over to the esteemed Mr Roberts to tell us more; "It started off with a brief from Tharg - He wanted a War Droid bringing his hammer down on the viewer.

I gathered up a load of reference images - particularly old-skool 2000AD covers and Simon Bisley. I wanted to get some thick impasto and airbrush effects in the image - to make it full of energy..."

Take a look at the images below, can you name the artist of each and where they appeared? Answer at the bottom of the article... Some relatively well known artists amongst that lot...

Now, my favourite bit, the obligatory Roberts' Reference photo, the man has no shame! He says "Then I took some reference images - this is always the fun part (I've hidden the eyes of the model to spare him the embarrassment) ;)"

As usual, Neil has spared no expense getting incredibly realistic props together to add realism to the image. He explains "I wanted to see how the arms moved and the torso rotated when in motion. The Cheerios box Hammer was an improvisation. Classy!"

Neil replied with a terse "No comment" when asked if the man who recently spent six hours in A&E at his local hospital with a cereal box stuck to his hand was him.

Check out Neil's incredible sketch, amazing! Note how Hammerstein's six pack is exactly the same as Neil's from his reference photo... 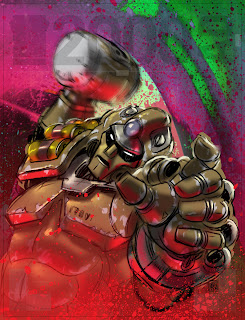 Going once, going twice... SOLD! To the man with the Cherios Box stuck on his hand.

With the sketch approved it was time for the main event.Neil says "From there, I worked the image up in Photoshop, adding a few textures here and there to make the piece look more traditionally created. "

"Then it was off to Tharg and the droids to work up for print. Finished!"And here's what the design droids at the nerve centre came up with, lovely! 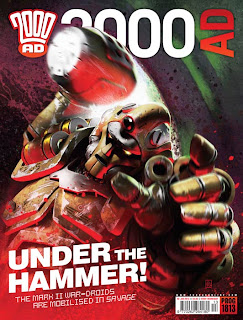 Thanks again to Neil for taking time out to tell us about this fantastic cover, please go and visit his rather wonderful blog here. Coming soon on this blog, the great Neil Roberts Reference Photo Quiz, keep 'em peeled!

Speaking of quizzes, did you get all the reference images?

Coming soon: IDW cover image round up, Karl Richardson's cover of Prog 1818 and something very special from Henry Flint...
Posted by Pete Wells at 01:45