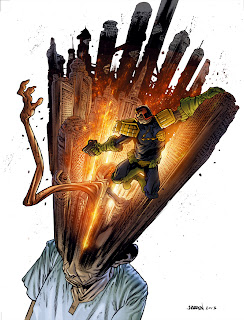 Here's a fine, fine debut Dredd cover from one of the comic industry's biggest rising stars, James Harren. Having worked for both Marvel (X-Men) and DC (Doc Savage,) James seems to have found his home at Dark Horse Comics, impressively adding to Mignola's Hell Boy universe as well as Turok and Conan. Not a bad CV there!

Rob Williams is obviously a fan and managed to persuade James to illustrate Mega-Cit One's toughest law man. Matt Smith, talking to the Comics Alliance website tells the story "Rob had been talking with James about doing a Dredd story together. Rob asked me if I was up for the two of them doing something.  When I gave the thumbs up he wrote the script for 'Save Him' specifically for him, knowing James's forte was big monsters. The post-Day of Chaos story starts with Dredd being brought before a catatonic psi-cadet called Salas, whose only words have been Dredd's name. Dredd has never met the cadet before, and while he's in the room with him things get very weird indeed... James has had great fun taking apart the city, cramming seven pages with as much destruction and action as possible! After Guy Davis and Dave Stewart's fantastic work for the Judge Dredd Megazine in 2010, it's great to see another BPRD artist bring their flair to 2000 AD."

So, over to James to tell us about the cover...

"I had the very vague idea of showing the monster crawling around the big buildings like a spider but absolutely nothing about that idea was going to work..."

Below are James' thumbnails, complete with big stompy spider - aaaggghhhhh! 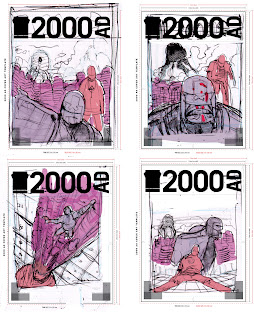 Thumb 2: Dredd shits himself after hearing that big, stompy spider...

And the incredible pencils for the chosen idea... 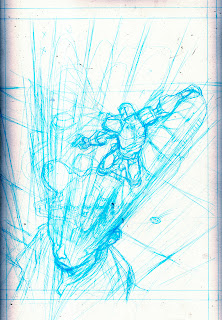 However,  with the spider idea abandoned, James ramped up the horror another way. He continues "I swapped the spider out with a big scary arm in the inks. That way we could keep the monster's full body reveal for the interior pages!" And what a monster it is! If you haven't read the strip yet, prepare for a treat!

Below are James' phenomenal inks, complete with spooky arm, which were sent to the legendary Chris Blythe to be coloured... 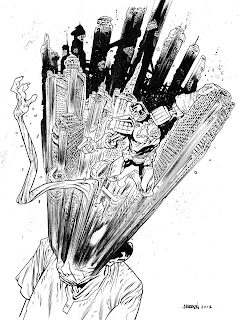 A man with a lot on his mind!

And the image as it appears on your super soaraway prog... 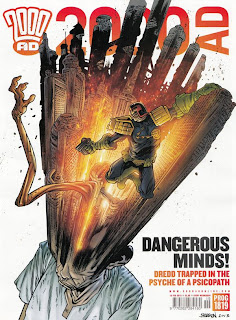 Huge thanks to James for sending the thumbs, pencils and inks, they're wonderful. Be sure to check out his blogs here and here and his brilliant Deviantart page here!
Posted by Pete Wells at 11:33