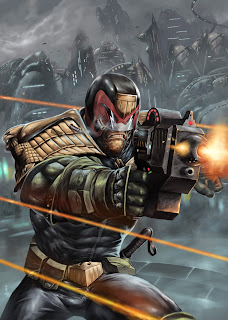 This cover is drokking amazing, I seem to say it every week but this yet another definite contender for cover of the year! I absolutely love it and know we're going to see this image all over the place in the coming months. Please Tharg, if you're bringing 2000AD posters, this has got to be on of them!

The cover, which brilliantly depicts Dredd in the thick of the action on the run up to the Day of Chaos, is by the fantastic Karl Richardson. Karl, best known for his excellent digitally painted covers, Dredd strips and as the designer of most of the visuals in the recent Grey Area story. He said "The brief was quite simple, Dredd blasting away with his Lawgiver! My initial scribble was one Tharg was happy with, so it was just a case of doing a neater drawing, scanning that in and then rendering it in Photoshop." 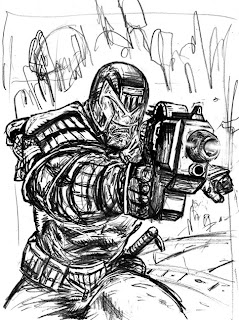 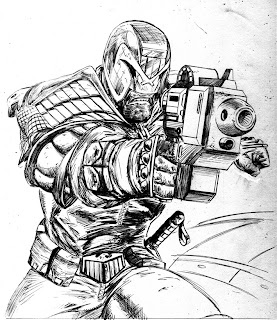 Karl's neater drawing, with and without bullets whizzing by Dredd. 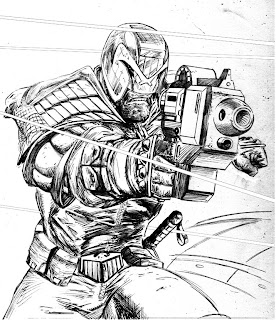 Below, is Karl's stunning rendering in Photoshop, however there was something missing... 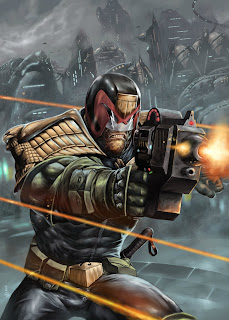 Karl continues "I'd had it in my mind to do some empty shells being ejected from the Lawgiver. As I began rendering I hesitated as I didn't want to obscure Dredd's face and helmet area too much. That meant positioning the shells possibly too far from the weapon  and then risking them looking disconnected. At the time I was also doing a private commission  for John Burdis, a 2000AD fan with a military background. Upon seeing it, he mentioned it would be nice to see some shells ejecting. That made my mind up to do them for sure, and as Tharg preferred them as well, that was that!"

Many readers will know fanatical Dredd merchandise collector John Burdis as the owner of The Cellar of Dredd. John, or Commando Forces as he is known on the 2000AD message board, does indeed have a military past and has been known comment (at length!) on the accuracies of tactics and manoeuvres used on 2000AD covers. Thankfully, John is now a full time civillian and keen gerbil breeder. I spoke to him and he told me the idea of having two shells was to show Dredd using the 'double tap' technique, the practice firing twice quickly in succession to ensure a target stays down, nice!

As John Wagner has steadily heaped the chaos on Dredd in the prog, Karl continued to put pressure on Dredd on the cover. He says "Right at the end I thought by adding some bullets whizzing by Dredd it would look more like he was in the thick of it. They seemed to work too,  so I was happy that both of those elements helped make the image more immersive!"

They most certainly did, I really can't speak highly enough of this cover, pure thrill power!

Karl is currently keen to take on private commissions. As a very satisfied customer, I can't recommend him highly enough. He is happy to do ink work but is desperate to break out his acrylic paints so please get in touch if you fancy something genuinely special!

Below is my Dredd and Mean Machine commission which I have to say is breathtaking in the flesh. Amazingly intricate brushwork and eye-popping detail! 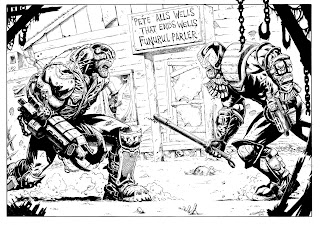 Also, here is the afore mentioned commission for John Burdis that Karl was working on at the time. It's an extremely cool Dredd vs. Johnny Alpha commission; the originality and composition in this one always blows me away, it's brilliant. 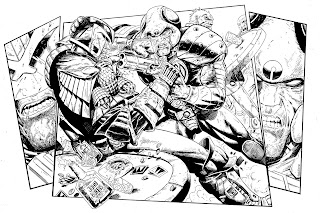 HUGE thanks to Karl for once again supporting the blog. I genuinely hope to see him on and IN the prog soon!
Posted by Pete Wells at 14:15