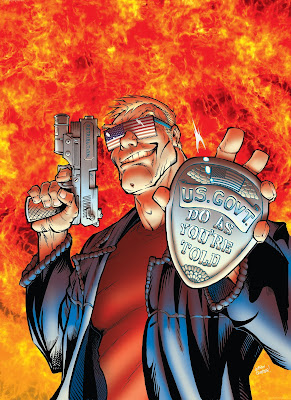 There are many, many talented 2000AD boarders who's work I'm gagging to see in the prog, and Gibson Quarter is certainly one of the picks of the crop! Though he is yet to appear in Tharg's mighty organ, his fantastic work can currently be seen with a whole host of 2000AD droids' work in Wasted magazine, edited by the legendary Alan Grant.

I was delighted when Gibson contacted me to ask if I wanted show his cover process for Wasted Issue 8 and naturally jumped at the chance!

"The gang at Wasted central headquarters asked me to draw up the cover for issue 8. The neat bonus of this assignment was that Frank Quitely was working as the cover editor for me on this one. "My instructions for this cover were "a Johnny K. holding badge out close so its surface is clearly readable, larger than the one on the red WOD Tee-shirts. He's holding his gun in the other hand. Give him the usual jock lantern jawed shit eatin' grin!”

"So, that said, I threw these 4 roughs (Very rough!) images back to see what they’d prefer. Part of my master plan here in drawing these so loosely, was to Get Quitely to draw some roughs back at me that actually looked like real drawings, but alas he didn’t bite. Sigh…next time. ;-)" 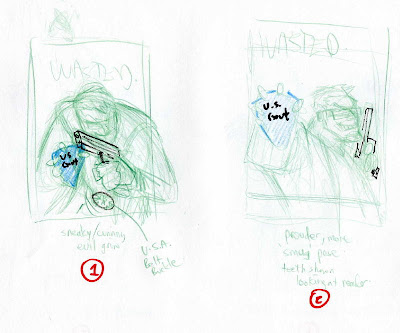 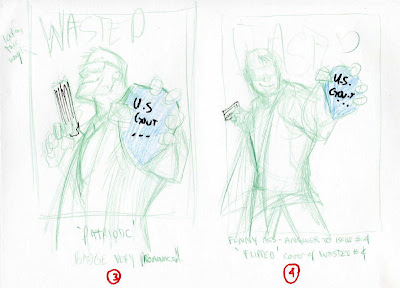 "The result was that everyone picked pose #3 as the preferred one. I kinda liked pose #1 the best, but I was out voted. Frank’s specific feedback was “I like 3 the best, but I think it would be improved by having him face us, so I took the head off 4 and dropped it on top of 3, and flipped it. Well, I moved the rear hand with the gun a tiny bit and cropped it so he seemed more balanced, and then voila! Maybe it could be still further improved by tilting the head back a bit so he's looking down his nose at us a little - but it's a trickier angle.”

With that he send back my crappy drawing tweaked in photoshop ( NO Frank! You were supposed to redraw it a bit, its part of my master plan!) His tweaked version looked like this: 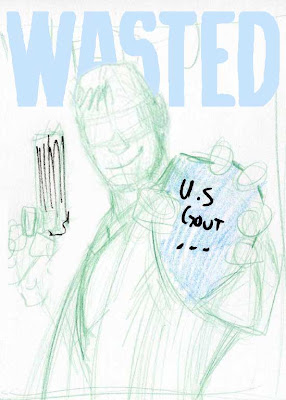 "After that I worked on it a bit and sent the pencils rough for approval...:" 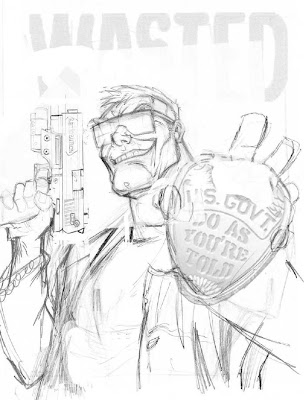 "Then tighter pencils before inks:" 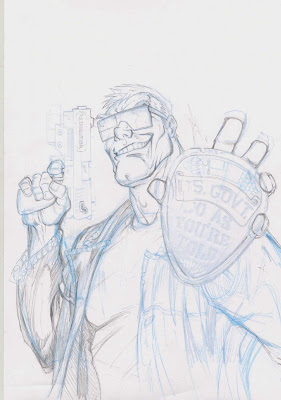 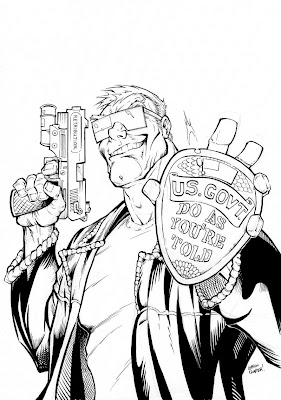 "Then the magic REALLY happened…Jamie Grant went in there an coloured it up to this:"

"All in all I was really happy with how it turned out. I think it’s a good iconic Johnny K ‘War on Drugs’ cover. Now, you’ll have to excuse me, I’ve gotta go and create another master plan for how to get a Johnny K drawing out of Frank Quitely!"

A brilliant article from Gibson Quarter there, here's how the finished article looked... 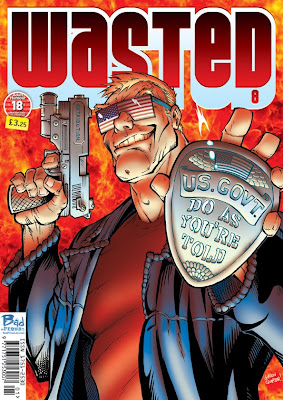 Aw maaan, can you imagine GQ's take on Dredd? Well, imagine no more, here are a few of his cracking entries from previous 2000AD compos: 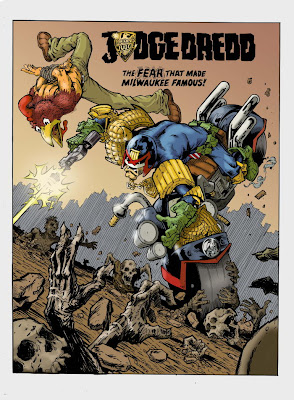 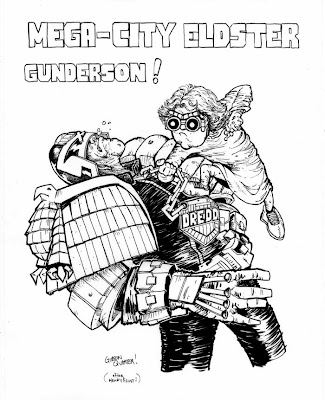 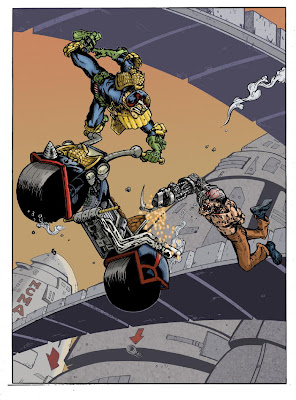 Great stuff, Thanks to Gibson Quarter for sending the images, they're really cool! Check out more of his work on his blog here. Aaaaagh come on Tharg, get this fella in me prog!