Under New Management by Simon Parr 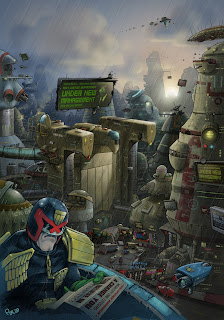 Proudly presenting the magnificent cover to Prog 1649. A brilliant cover to match an amazing episode of Dredd (I won't say anymore as I'd hate to spoil it for those that haven't read it yet!)

As the sun rises on a momentous day for the Justice Dept, we see an ominous sign above the Halls of Justice - 'Under New Management', heralding the beginning of Dan Francisco's tenure as Chief Judge. Yikes, what's going to happen to Dredd, Hershey and all those poor mutants?

Super helpful droid Pye was kind enough to send me the roughs and pencils for this image too, as well as an insight into how it was created. First, the roughs: 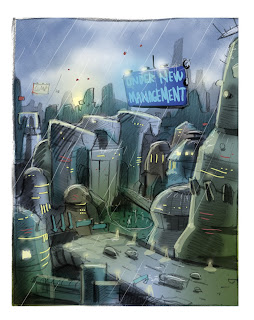 Pye says: "You can see from the rough how the cover changed from idea to final version. I wanted to add a figure in to stop it being TOO inanimate, and we moved the hover board over the top of the justice dept building to make it clearer what it was referring to.

Initially the idea was totally different. Matt wanted to have a really close up pic of a sign hanging from some string or chain or whatever wrapped round some ornate Eagley-sculpted justice dept door handles with UNDER NEW MANAGEMENT written on it.

I did some cool door handles too but we sacked that off in the end, as it wasn’t immediately obvious what the hell they were... And I was loath to put something so obvious as a keyhole underneath to try and get the point across (like the base of an all powerful military dictatorship with hover tanks, flying cars and guns with fingerprint recognition in them would still use keys!)"

Once the idea was nailed, Pye produced the fantastic pencils below then used pure Thrill Power to colour the final image (above): 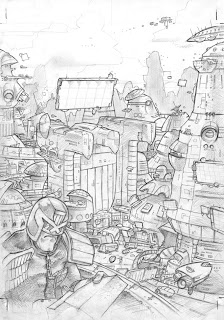 I'd like to say a HUGE thank you to Pye as he's been more than generous in sending many covers (keep checking back folks!) and for taking the time to talk us though the creation of this Mega-City masterpiece. He also sent a full sized copy of this little beauty below, which is currently part of a place holder on the current site, enjoy: 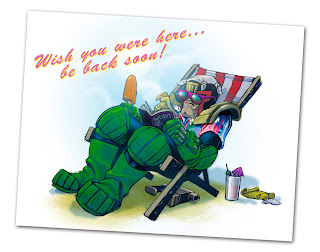