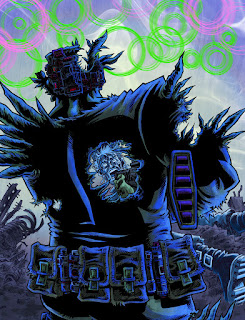 "Attenshun!!! Fall in with Bad Company, you maggots! Sergeant Dayglo will now give us a sit rep on this weeks' Bad Company cover! Make sure you listen soldier, you life could depend on it!"

"After starting the new Bad Company - First Casualties series, I was asked to do a cover. Prog 1950 was a jumping on issue, so naturally Tharg wanted Dredd on the cover, so I got to a cover for episode two. However, my first ideas were referential to the first episode as I didn’t know at the time 1950 was a jumping on issue, so I went with Danny’s nightmare of dying overlaid with Kano, to reintroduce the characters, and to add drama…is Danny dead??" 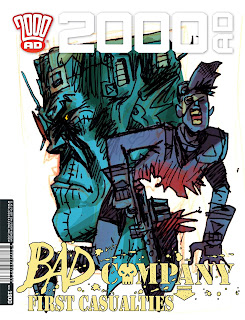 "The other was a slightly more generic crazy Kano…what’s happened to him? How has he been changed?" 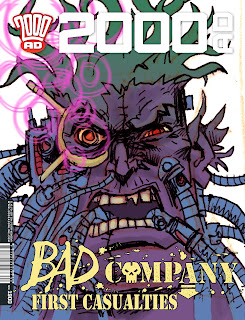 ﻿
Dammit! Kano had run out of Frizzeaze again!
"By the time I got the second script, it was all about the reappearance of Kano, so I went with a Joe Kubert approach. He’d do these awesome war covers for Sgt Rock, or Unknown Soldier where the viewer can’t see the approaching horror, so all you see is the soldier’s reaction  (for example, an oncoming Tank attack!)"

Not quite the kind of Kubert image Rufus was talking about but I just liked it, okay!?! 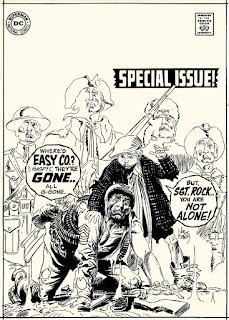 ﻿
The ghost of Michael Jackson comforts Sgt. Rock. ﻿
﻿"I also wanted Dialogue on the cover. I think it’s proper old school, and I loved character’s leading you into the story with shock dialogue!!!" 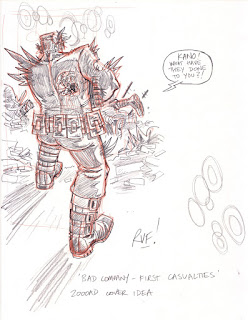 ﻿
Kano put Danny over his knee...﻿
"So I went with the idea of Danny facing the zombified undead Kano for the first time….Kano’s Krool blood kind of regening him, hideously remorphing him with krool spikes as he heals from wounds, making him more like the old enemy. And for a humourous twist, I thought it’d be cool to have Danny looking THROUGH the damage in Kano’s war ravaged body. Proper Frankenstein material!" 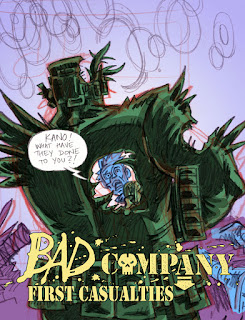 ﻿
A hole lot of trouble for Kano
﻿
"I did a bunch of thumbnails before going for that composition, then drew out the full figure to ‘anchor’ the scene for me. I then sent a little coloured rough to Tharg, he approved it, munching through some fresh Styrofoam cups, and gave me galactic permission to proceed with my artdroid duties." 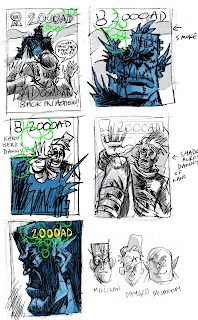 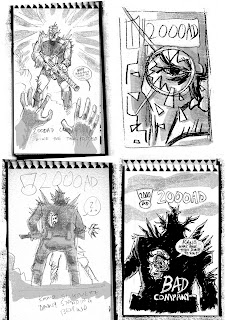 Maybe it's time for Tharg to do variant covers?
﻿
I then inked and coloured the cover digitally... 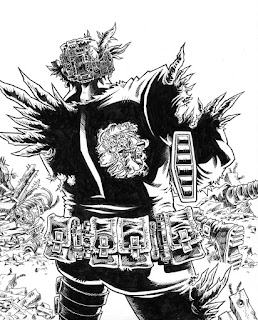 ﻿Why are Bad Company good at golf?
'Cos they always get a hole in one!
(I'll get me coat...)
﻿
"I then put a strap line and dialogue balloon on a separate layer, as a guide for the designer to correct/improve it." 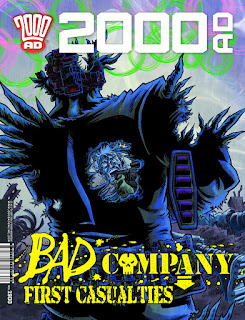 ﻿Rufus plays designer, look he forgot to cover the title...﻿

"Then BOOM, onto the Galaxy’s Comics shops shelves!" 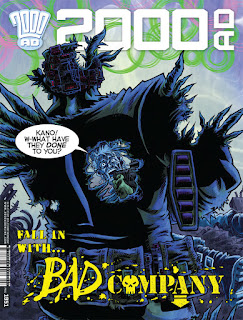 ﻿
The title is covered, normality is restored!﻿
I would like to thank Rufus from the bottom of my Krool heart for sending the wealth of images and his enthusiastic and entertaining text. He's had a REALLY busy weekend but still took the time to send me multiple emails with more and more amazing images!
I'd also like to take this moment to thank Rufus and Jim McCarthy for their amazing work on the current strip. It is genuinely incredible and I'm sure I speak for many when I say it's a truly fitting tribute to the late, great Brett Ewins.
﻿
Posted by Pete Wells at 12:32