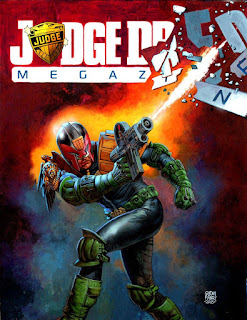 Dredd shoots himself. It's like the Apocalypse War all over again...
﻿
Here's Glenn Fabry's cover to Megazine 360, where Dredd sends another logo to RESYK! It's another trademark painted masterpiece by Glenn who is pitching a sketchbook on Kickstarter. So, if you're a fan of Glenn's work (and let's face it, who isn't!?!) be sure to check out his Kickstarter page and pledge a few quid!

Of course, this isn't the first time the logo has been aggressively retired by wayward comic characters, Slaine gave it the chop back in Prog 1199 courtesy of Mark Harrison... 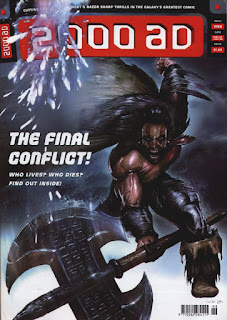 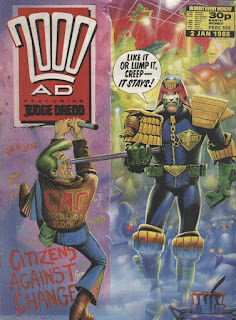 Maybe that citizen could get some green paint and make Dredd's pads the right colour!!! 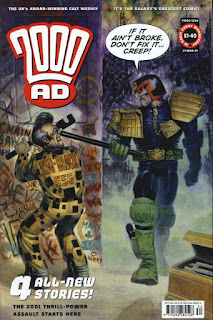 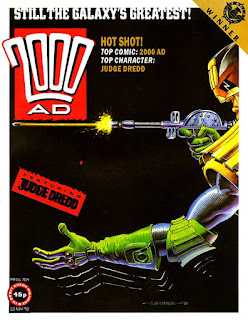 A Steve Tappin's death of Rogue sees the death of a logo too. 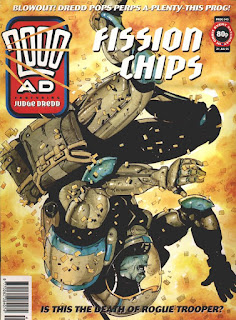 ﻿Rogue has had his chips!﻿

Enough logo abuse! I say it stops now! Write to your MP and demand equal rights for 2000AD logos!

Thanks to Glenn for sending the Meg cover. Go check out his sketchbook page Earthlets!
Posted by Pete Wells at 15:01