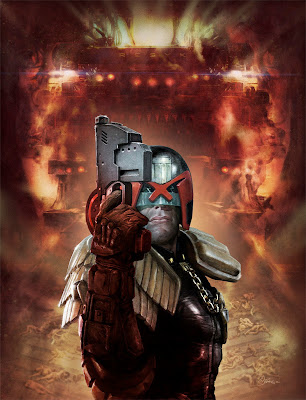 Mark Harrison is Rebellion's head concept designer and maaaan, does it show! Every aspect of every cover he does is considered to the nth degree and absolutely packed with research and revisions. This brilliant cover to Megazine 317 is no different, as you'll discover as you read on.

When I contacted Mark, I congratulated him on having a Meg cover with the most cringe-worthy tag line in 2000AD's long history. Resyk-Hell was the offending tag line (Recycle, geddit?) and Mark proudly told me that he was responsible for that stinker! For shame!

I also asked Mark about his change of style here. I pride myself on being able to identify an artist's work on sight but this cover threw me. Mark said "A lot of the image was based on photo imagery, specifically the Judge Minty fan stuff. At one point I was digitally painting up Greg Staples as Dredd, artist painting a fellow artist as a comic character in a costume created by fans....!" Cool! Check out the Judge Minty site here to see more!

Mark takes us through the creative process - "It's pretty tough to come up with a new Dredd pose that's also cool, but it's probably going to be the execution that will mark it out as different. So with that in mind, take a look at these 4 dredd poses, and take account of the second sheet (no colour) that has some additional ideas." 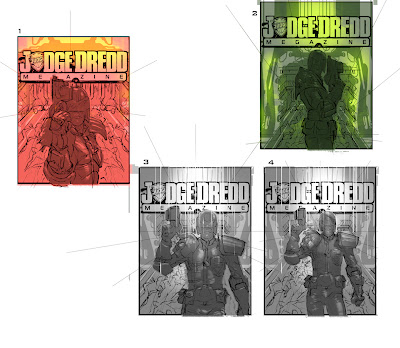 Tharg was happy with the initial ideas, saying "Thanks for the cover sketches. I like no 1 the best in terms of Dredd’s pose, and I like the reddy orange colour scheme..."

Moving forward, Mark has some vivid, nightmarish visions of Resyk, particularly the processes involved in breaking down bodies and the ambience of the place as a result. He says "I have it in mind that the basic background has a hellish reddy orange glow, the idea that Resyk is "Hell" and that'll be reinforced with lots of billowing steam rising up, think of the carbon freezing chamber in The Empire Strikes Back."

Mark explains "I imagine the conveyor belt being spot lit, patches of dark and light. There's some nice accidentals that sell the "ResykHELL vibe - giving it a broiling billowing steam look of Hades with a demonic face/maw - looking body processor (part garbage truck, wood clipper and meat grinder) at the end of a conveyor belt.

Conveyor belt steams for added dynamism; there's steam pumped through drainage holes plus pools of boiling water used to clean the bodies- something I learned from my abattoir ref. I blurred the bodies to suggest heat haze but also to kill the graphicness.

There's lots of arterial pipes pumping fluids to other areas for processing. Funnily enough all this references a little know 80's horror film "Razorback" (about a Giant Boar terrorising the Outback,) very hot and humid."

So below we can see Mark's version of Resyk's fearsome conveyor belt... 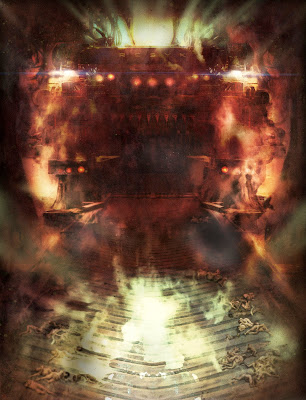 Now to Dredd - "Dredd is in a patch of dark but just passing under a close focus spot of white light that is picking out his head and shoulders in natural colours. The rest fades off in both detail and colours.

I felt the image need something more and I don't know if this is the case but I recall resyk uses digestive nozzles to break down the bodies, or they are at least showered in boiling water (I've looked at enough abattoir stuff to know this is the case!) I've imagined the lawman has had a bit of a shower which gives me the excuse for wet streaming Dredd which makes it a little different and dynamic. Dredd's got an almost religious look about him too. A Hellish image!" 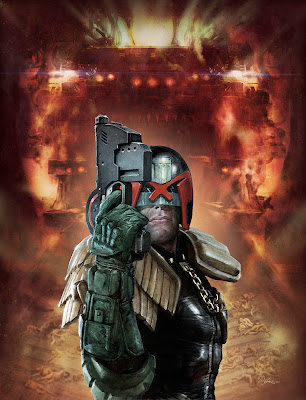 Mark continues "He has a Clint Eastwood scowl. Clint was the coolest guy in the planet in the 70's! I find that chewing a bee look to be a bit caricature so I'm just going with disdain!" Yup, those lips are definitely Clint's... 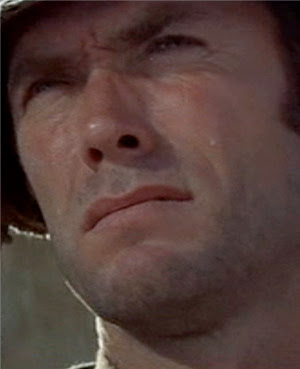 Again, Tharg was pleased with how the cover was going (or as pleased as the migty one gets,) with only a minor quibble, saying "I’m not sure about the ‘wet look’, it doesn’t happen in the story (Dredd just chases the perp into Resyk) and I think it’s just going make the reader wonder why Dredd’s stepped out of the shower. So can we keep him dry?"

Mark also had a few colour tweaks for the image too, he said "I found knocking back the green gloved arm into "red light" help focus the attention on Dredd's face, where it should be. See it without and see how it all looks a little too cut out. Resyk was pretty detailed but don't fall in love with the background so I blurred it."

And with that, Tharg was very pleased with the cover. He said says "A very nightmarish version of Resyk. Good pun, too!" For once, I must face the wrath of Tharg and disagree, while the image is excellent, the pun is awful! Almost as bad as mine for this article!

Below is a wallpaper which Mark has kindly done for us, including his favourite bit. I'll let him explain "My fave bit is the eye you can just see through the visor. Once you see that the expression has more intensity. With: Intense! Without: Passive disdain! That's the problem with a helmeted character (and one the film will have to deal with) you loose a lot of expression without the eyes to convey nuance." 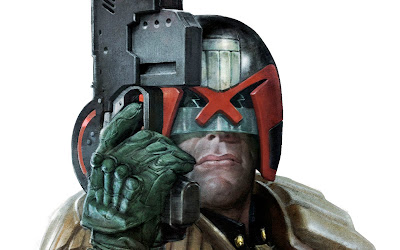 As a further bonus, Mark has included his helmet study. "I've also attached a helmet workout I did to try and figure out the bloody thing..." 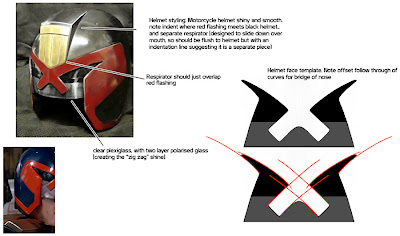 Thanks yet again to Mark there for another fascinating walk-through of his creative process. I always look forward to an email form him as they are always jam packed with details and imaginative commentary. Remember, you can see more of Mark's brilliant work here.
Posted by Pete Wells at 05:09