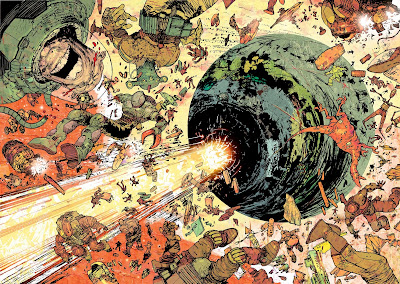 All hail King Henry Flint who has once again managed to adorn a page with a potent mixture of concentrated Thrill Power fused with equal touches of brilliance, genius and, of course, madness!

This weeks' cover, not surprisingly I suppose for Mr Flint, depicts a planet, yes, you read right, a freaking planet, being driven(!) by the wrathful, genetic embodiment of a long dead alien race, destroying the biggest amassed star fleet you could possibly imagine! A challenge like that would be enough to see many of Tharg's droids pop a rivet or two, whereas I'm sure Henry, who has given us zombies in codpieces, electric eel guns, Mr Meat Bingo, face-eating fruit and chainsaw motorbikes to name but a few of his creations, took it all in his stride.

Below are his roughs which I'm sure Tharg approved instantly... 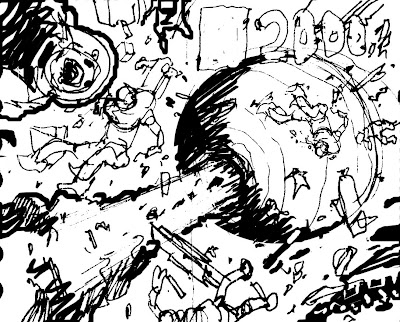 Followed by the brain-melting inks below! One of the many high points of Shakara as a whole has been Henry's wonderful alien designs, from robotic dinosaurs to balloon dog headed monsters to teddy bear aliens to floating skulls, the series has seen some of the most imaginative creatures in 2000AD's rich history. What a treat to have so many of this cover in glorious High Res! 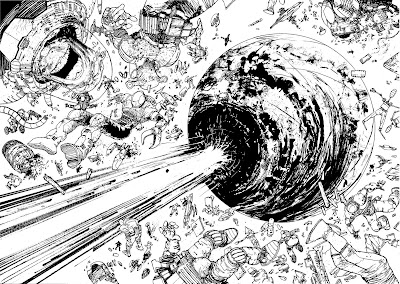 Below are the colours for the finished, but not actually the printed cover. Henry says "I sent 2000ad two coloured covers. This is the finished cover but they preferred the look of the first version which finally made the cover."

Unfortunately, Henry deleted his earlier version so check back next week when I should have a copy of it. Thank you so much to Henry for sending the wonderful images and text, please keep your eyes open later in the year for Henry's forthcoming art book entitled Broadcast: The TV Doodles of Henry Flint. The book features around 100 of Henry's wonderful illustrations and will have text by Slaughterman's Creed's Cy Dethan, you can read more about that here.
Posted by Pete Wells at 07:14